If you’re in need of DIY sock monkey party ideas, have I got some inspiration for you! Decor, crafts, activities, homemade cake pops… this party was a labor of love for crafty mama Nikki, who spray painted, glued, baked, sewed, and stamped her way through a wide variety of DIY projects for her son Luke’s first birthday party. There are handmade and personalized touches everywhere you look! 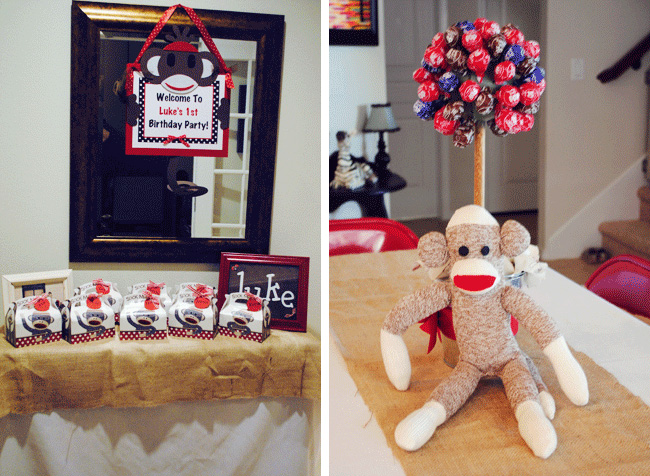 A handmade sign welcomes guests to the party, and gable boxes filled with party favors are displayed beneath. The Tootsie Pop tree centerpiece is homemade (more on that to come!). 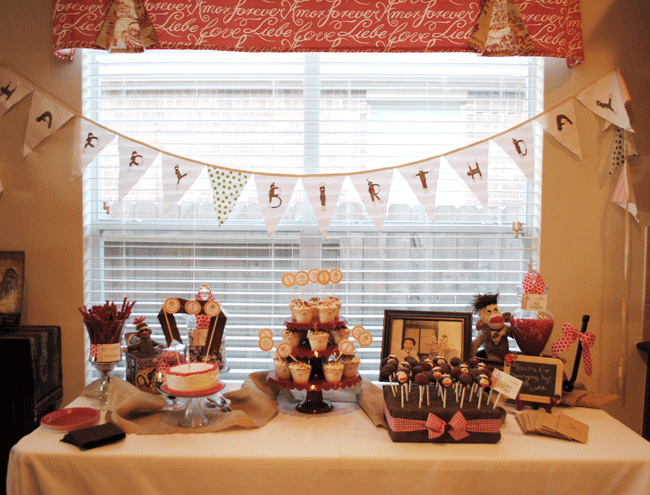 Sock monkeys and more sock monkeys! The banner above the table came from Amazon. 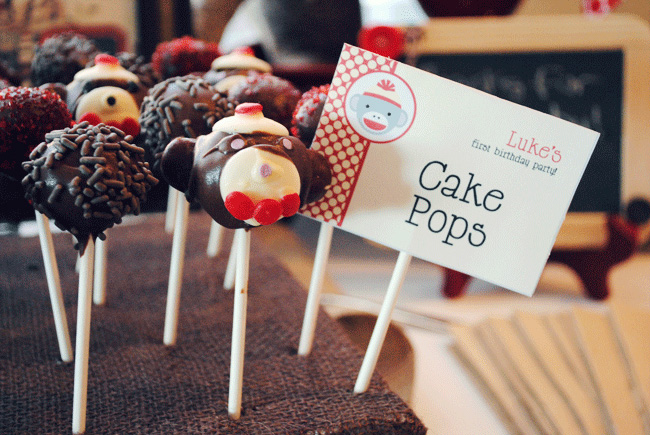 Nikki says that Luke’s adorable cake pops “were made with much love AND profanity! : )” – LOL! To make them, she started with this basic Chocolate Cake Pops recipe. The buffet card is a DIY printable from my shop. 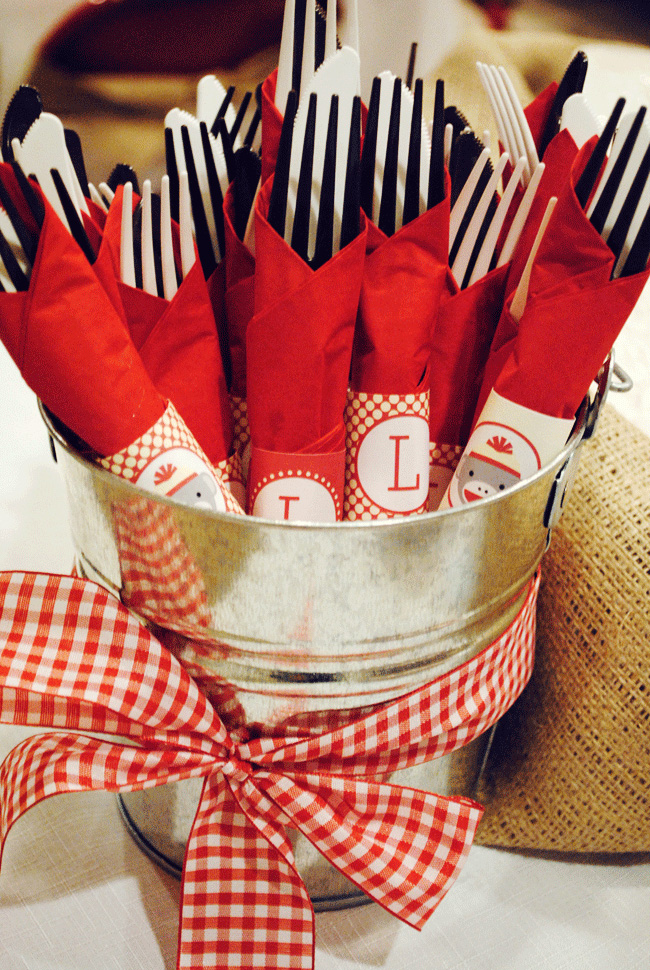 The black and white utensils were dressed up in red napkins and printable napkin rings. They look charming inside of the galvanized bucket with gingham ribbon trim! (All of the ribbons throughout the party came from Hobby Lobby.) 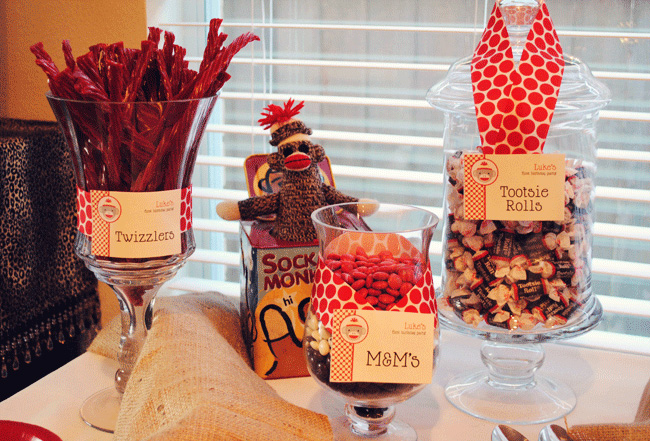 Red and white polka dotted ribbon from Hobby Lobby and printable buffet cards dress up the jars of candies. 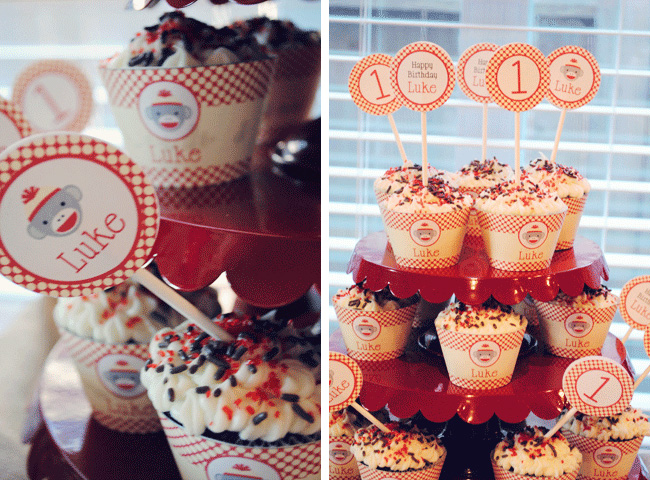 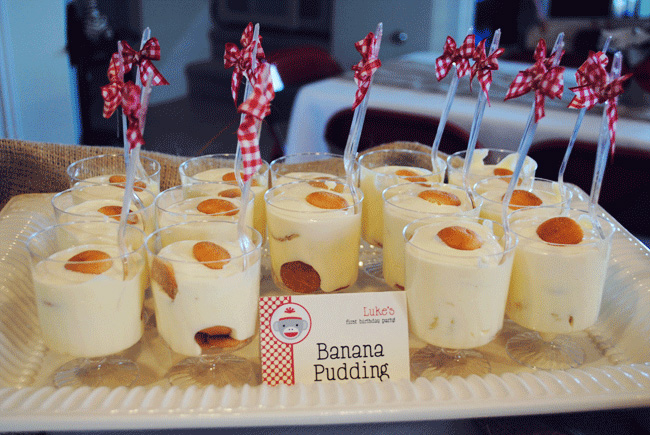 The gingham ribbons on the ends of the spoons give them a special touch! 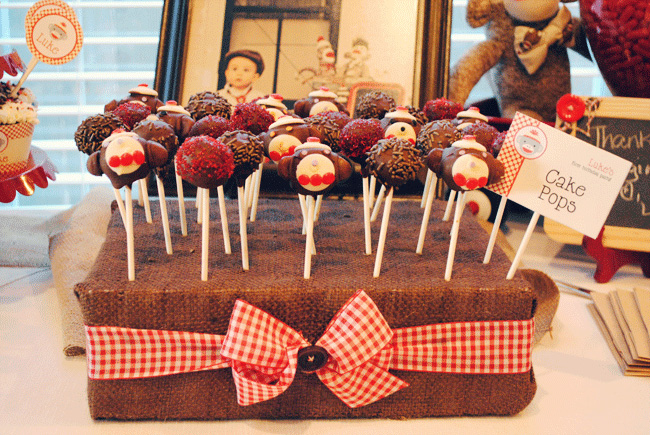 The cake pop stand was made by stacking 3 styrofoam rectangles together and covering them in brown burlap, then adding some red and white gingham ribbon and a brown button. 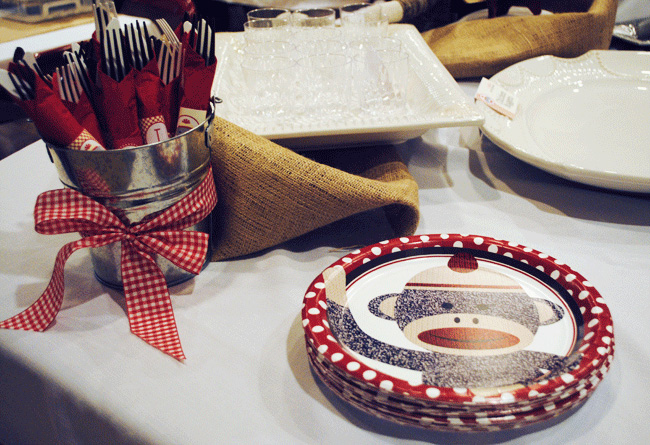 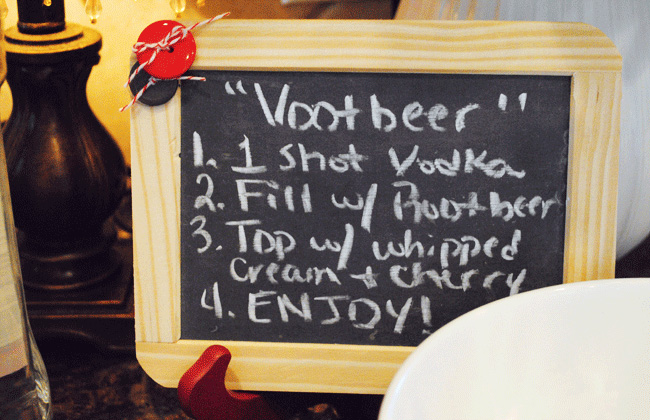 Chalkboard frames like this pop up all over Luke’s party, and they’re so sweet! They were purchased from Hobby Lobby, then jazzed up with buttons, ribbons, and small easels that were spray painted red. All of the supplies came from Hobby Lobby. 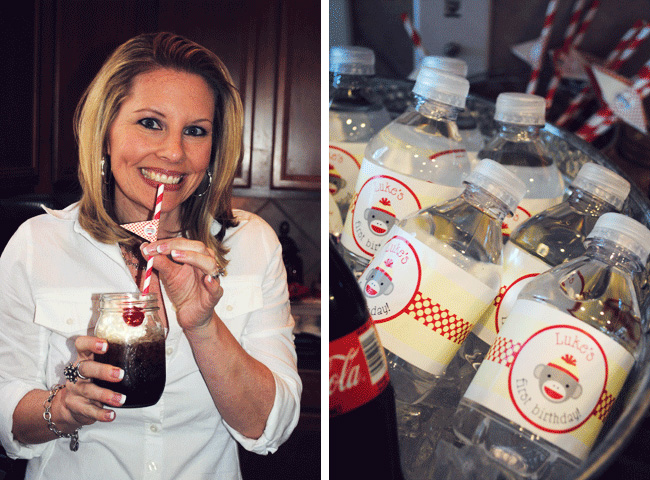 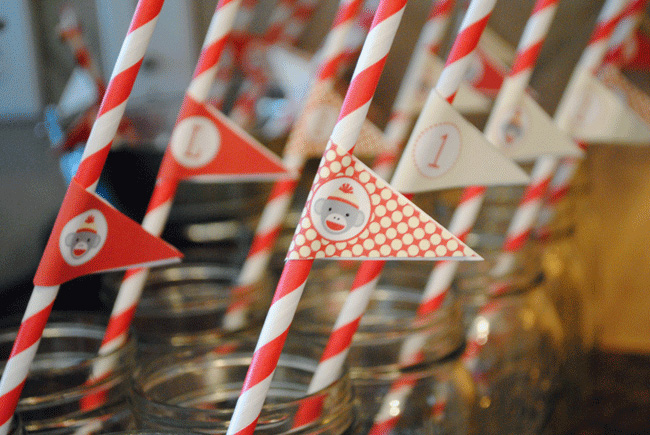 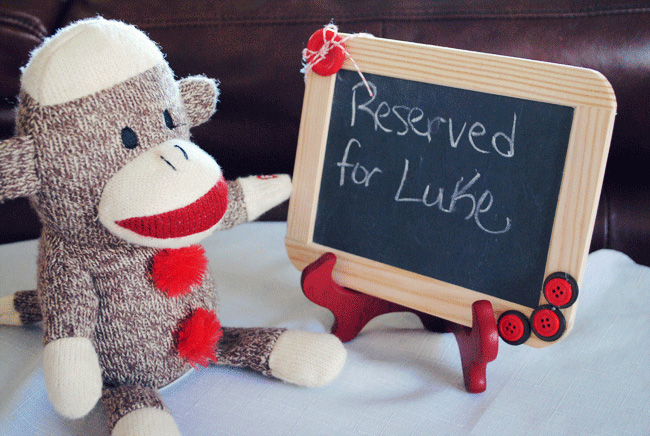 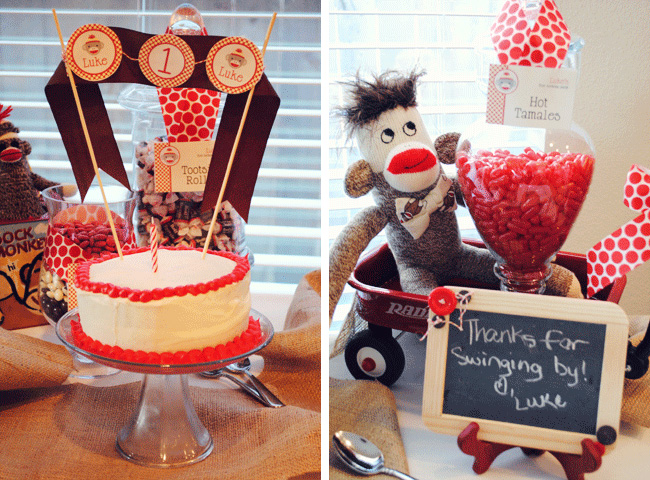 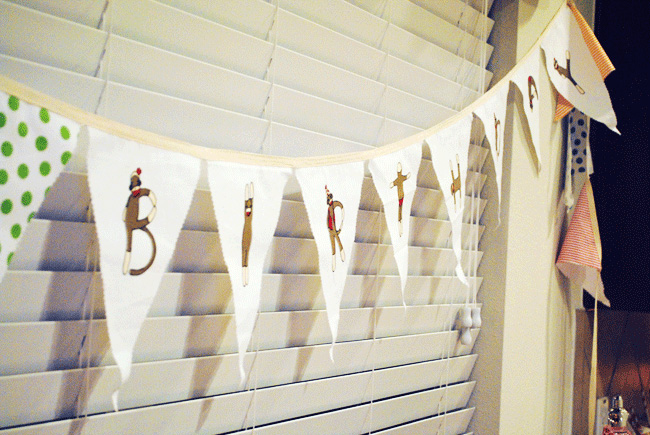 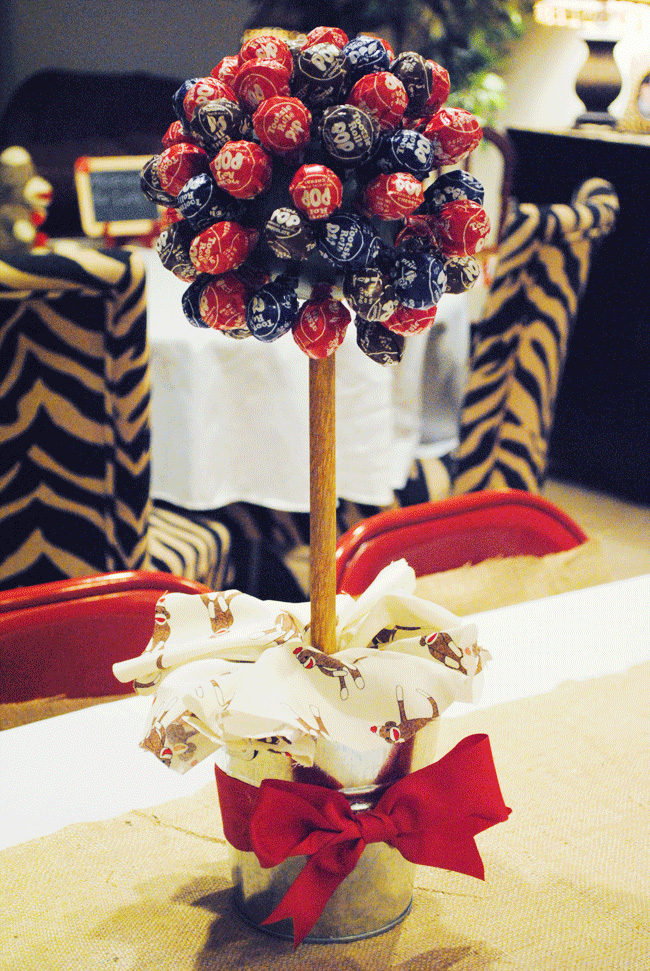 The Tootsie Pop tree was made using a large wooden dowel, a styrofoam ball, a metal bucket, and Moda 5 Funky Monkeys fabric from Fat Quarter Shop. 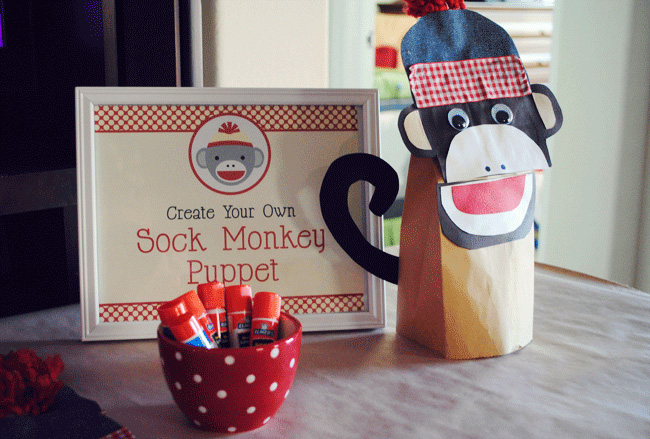 Each little party guest made their own sock monkey puppet, then took turns putting on shows in the puppet theater. 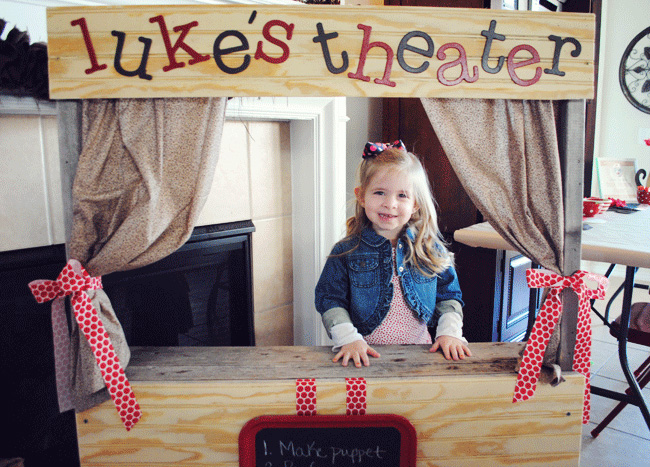 How sweet is Luke’s puppet theater! It was homemade, and the lettering was made using large chipboard letters from Hobby Lobby that were spray painted red and chocolate. The curtains were made from fabric from Fat Quarter Shop. Nikki says, “I just ordered a yard and cut it down the center and used some fabric glue to create a faux hem.” 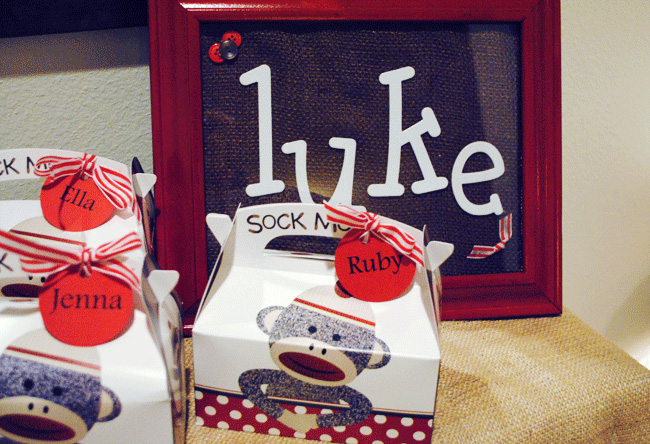 The framed sign on the favor table was another one of Nikki’s craft projects. She says, “it was an old black frame that I had and spray painted red. Then I added some brown burlap from Hobby Lobby and some white chipboard letters to spell out ‘Luke.’ The buttons and ribbon came from Hobby Lobby – everything was simply hot glued to the brown burlap.”

Inside of the gable boxes, favors included bags of red, cream and brown M&M’s, stickers from Amazon, coloring books, temporary tattoos, and little bunches of crayons that Nikki tied together with strips of fabric. 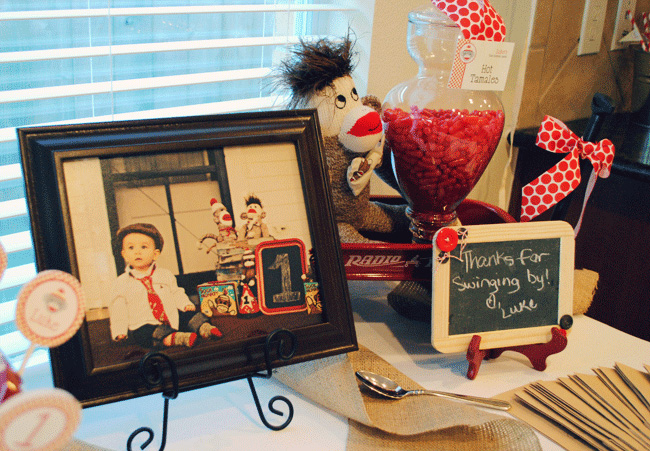 The dessert table decor included a framed photo from Luke’s first birthday photoshoot, a handwritten chalkboard message thanking guests for coming, and a little red Radio Flyer that was an Amazon find. 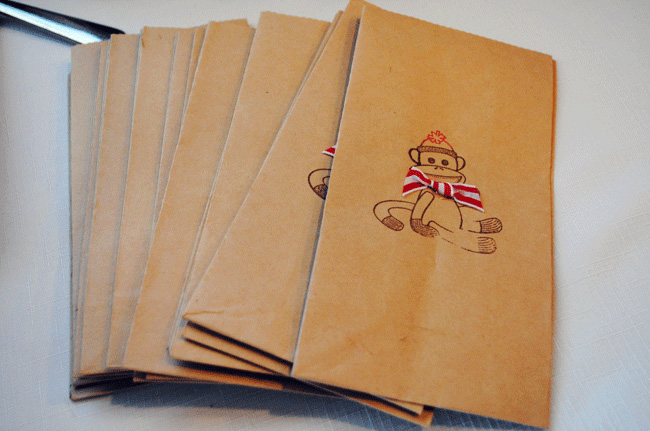 The little brown paper bags on the candy bar were yet another DIY project! Nikki says, “I have to give my husband some credit here… he found the sock monkey stamp at Hobby Lobby when we were there one day. I didn’t really know how I would incorporate it into the party, and then I stumbled upon those small paper sacks and thought they would be perfect! I bought a brown and red ink pad for the stamps and then used a red and white stripe ribbon from Hobby Lobby that I tied in a bow and hot glued to the bags.” 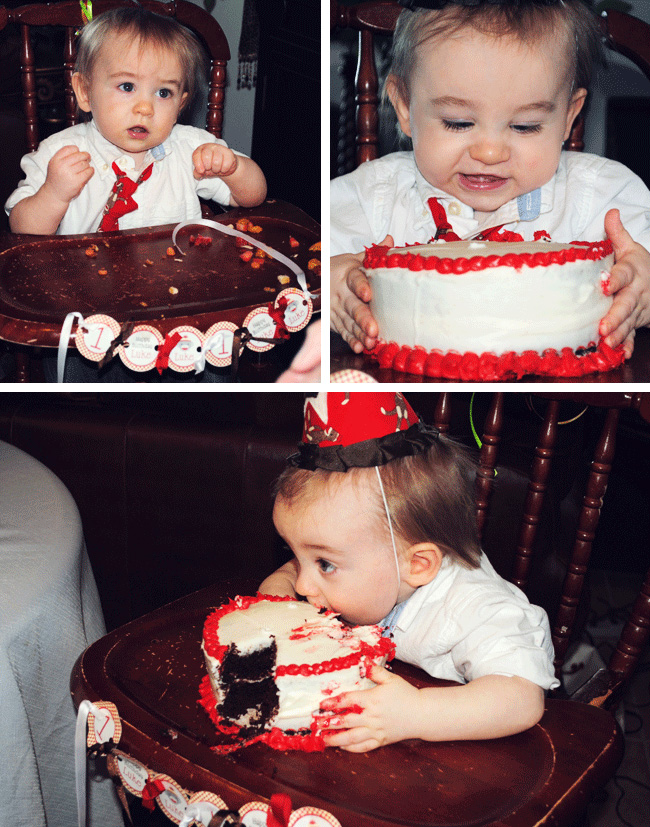 Smash cake time! The little banner on the front of Luke’s high chair was made from cupcake topper circles and ribbons, and his sweet tie and hat are from Etsy.

Such an amazing party – thank you so much for sharing, Nikki! Happy 1st birthday to Luke!