This party can only be described as a rainbow explosion! At least, that’s what crafty mama Sara and I have been calling it (with much love). : ) Sara put this party together for her daughter, Emma.

Sara has some serious talent for DIY crafting, and she makes one heck of a rainbow cake, too. I think you’re going to love this party as much as I do! 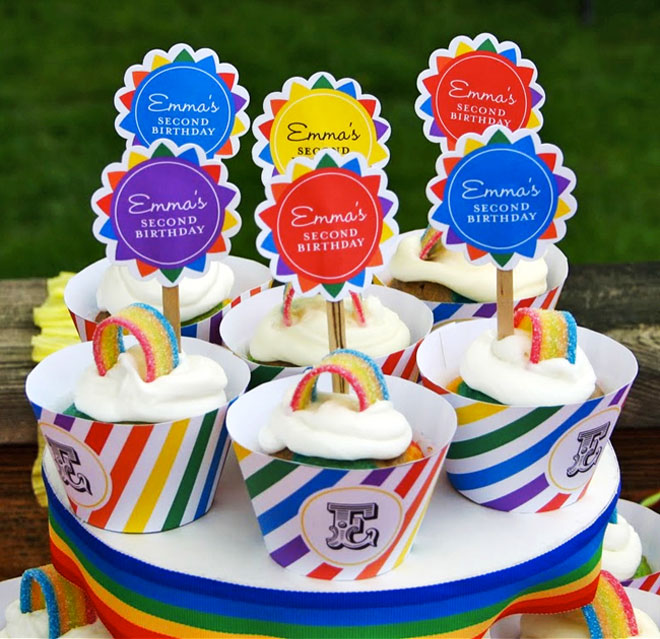 I have to start with the cupcakes! These are only about the prettiest rainbow cupcakes ever. The cupcakes themselves are rainbow colors,  and candy rainbows are sitting in little fluffy white clouds of frosting.

I thought that the little rainbows were custom-made, maybe, but Sara said “they’re made from AirHeads Xtremes Sour Belts candy. They come in a strip and I cut them down to make little rainbows.” 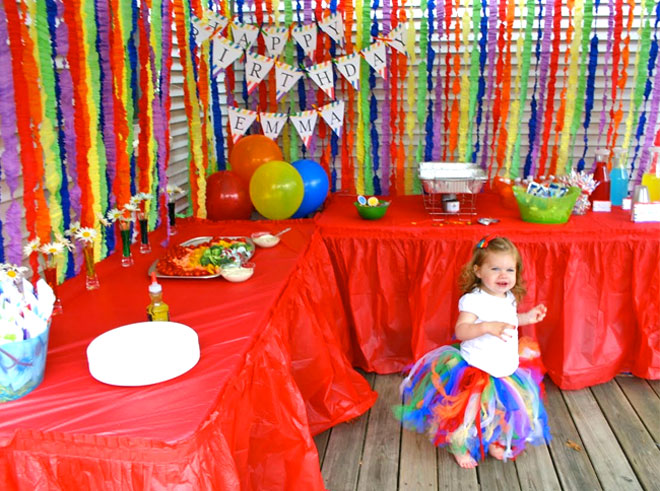 Here’s birthday girl Emma! She’s a little rainbow, herself, in a tutu purchased on Etsy. 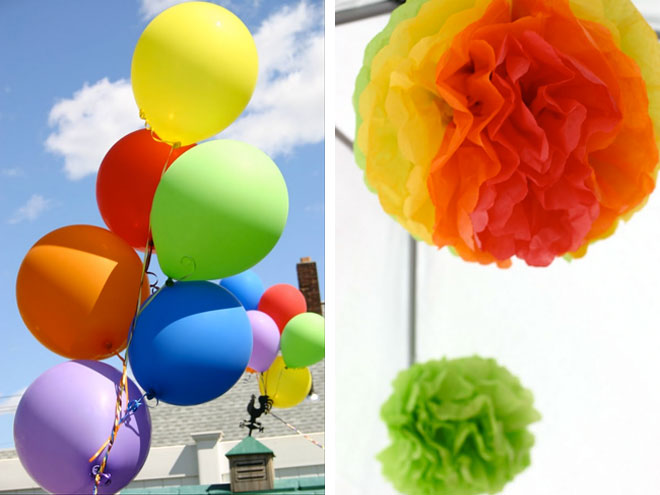 Balloons are a must, of course, and the party poms were homemade (!). 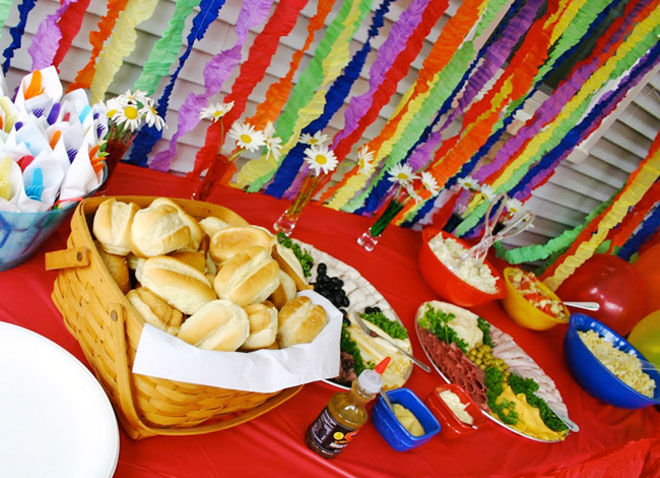 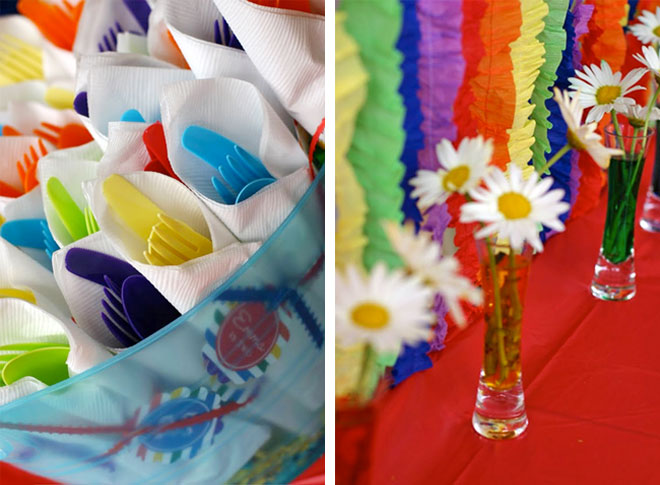 Flatware in every color is wrapped in white napkins and tied with ribbons and a printable. To make the ruffled rainbow streamers, Sara used the tutorial on How Does She. She says they were “easy, but time consuming… a HUGE hit though!” 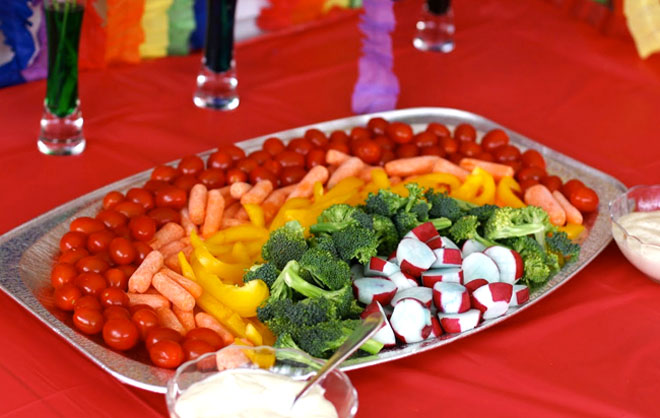 How fun is this – a rainbow of vegetables, with bowls of dip for the “clouds”! To get the full spectrum, the radishes were tinted with a little blue food coloring. 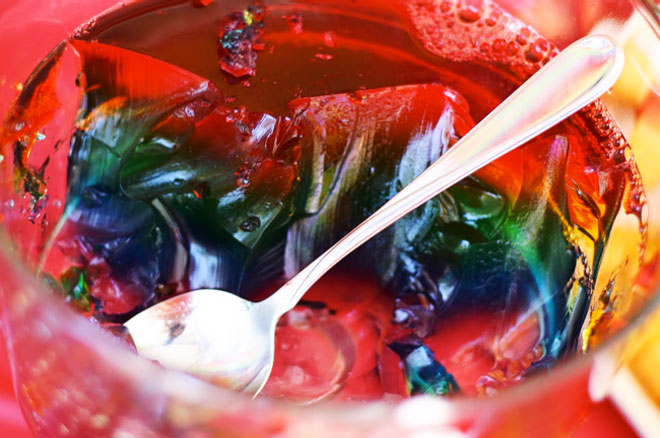 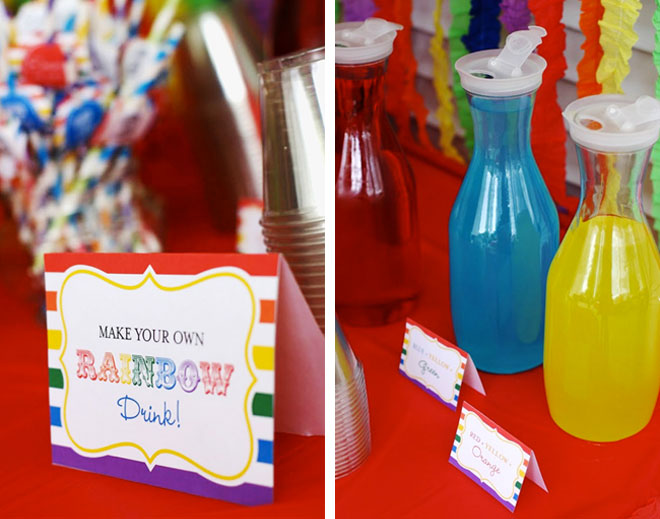 The “make your own rainbow drink” bar was 100% Sara’s idea. The personalized buffet cards explain different color combinations that you can create (such as “red + yellow = orange”). How fun is that! 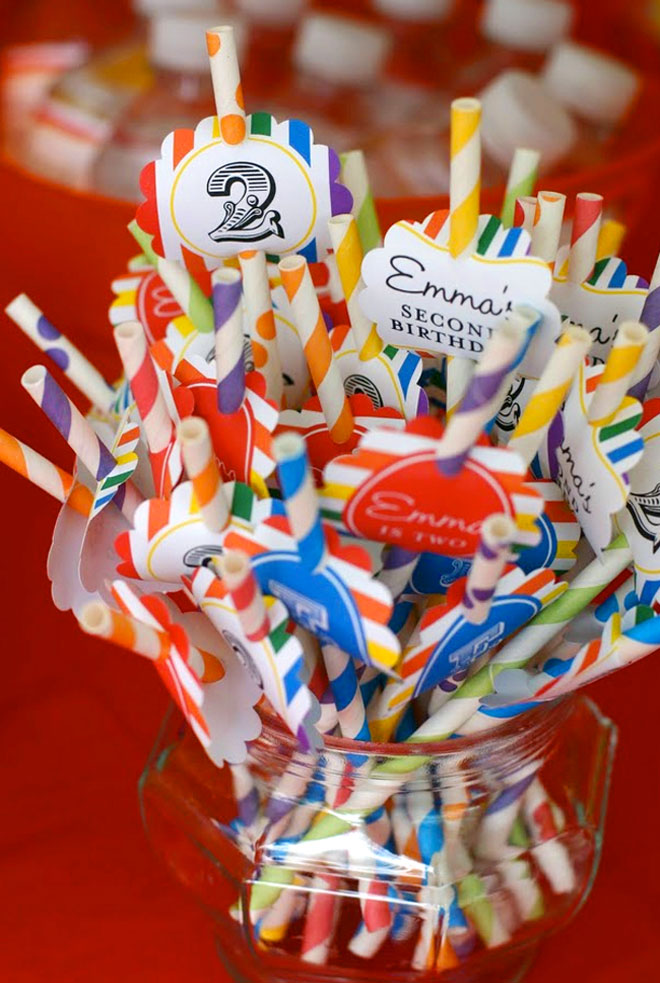 I adore this detail. Sara punched holes in her printable circles to make little straw… badges? I don’t even know what to call them, but they’re just the cutest things! 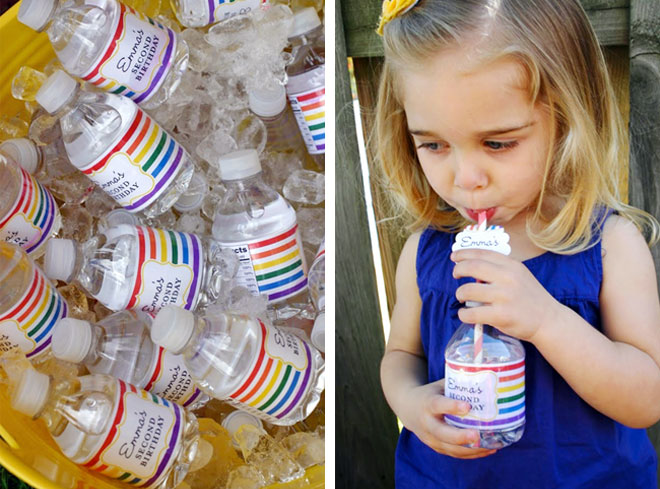 The custom water labels were a big hit! 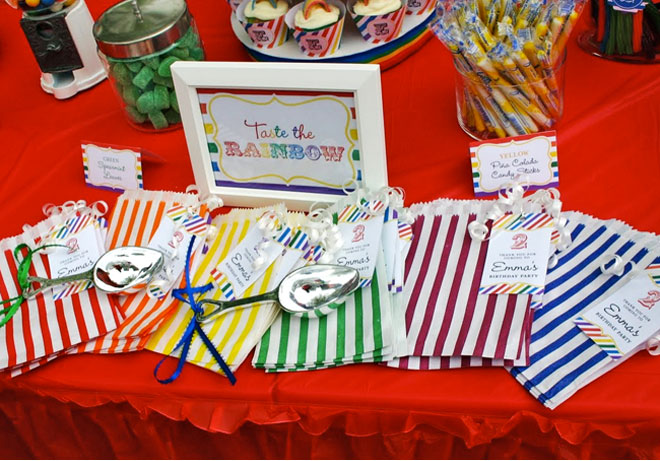 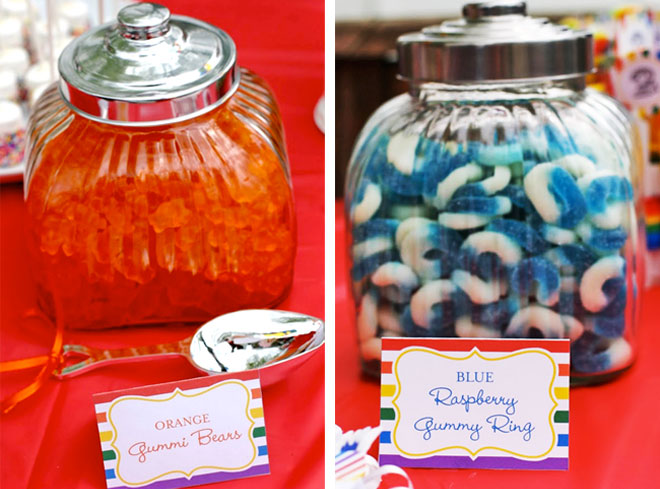 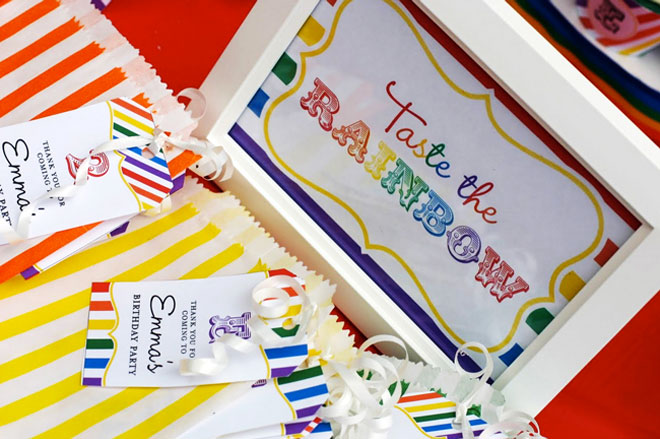 The “taste the rainbow” sign and favor tags are both printables from my shop. 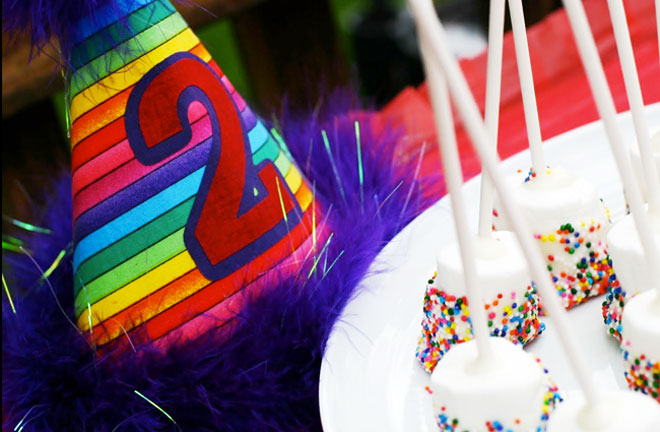 The fabulous party hat was purchased on Etsy, and the marshmallow pops were homemade. 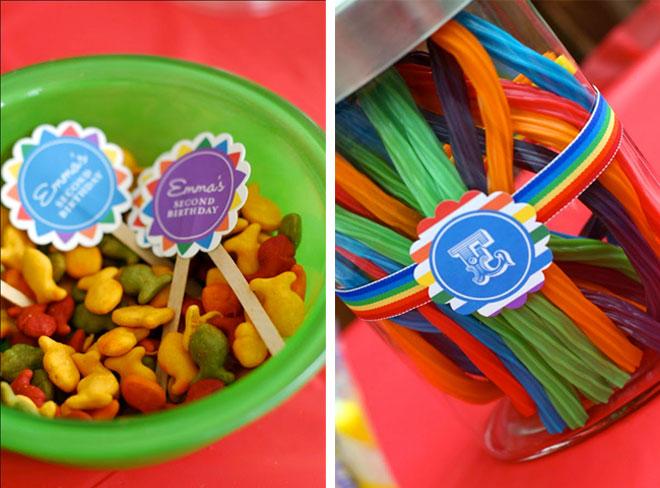 Rainbows everywhere – even the goldfish crackers and Twizzlers are in rainbow colors! 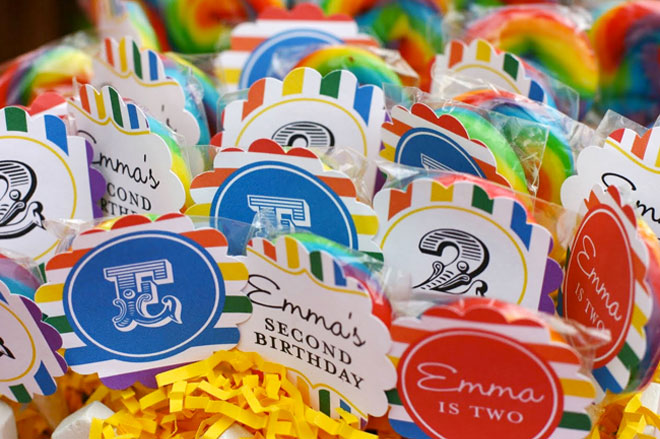 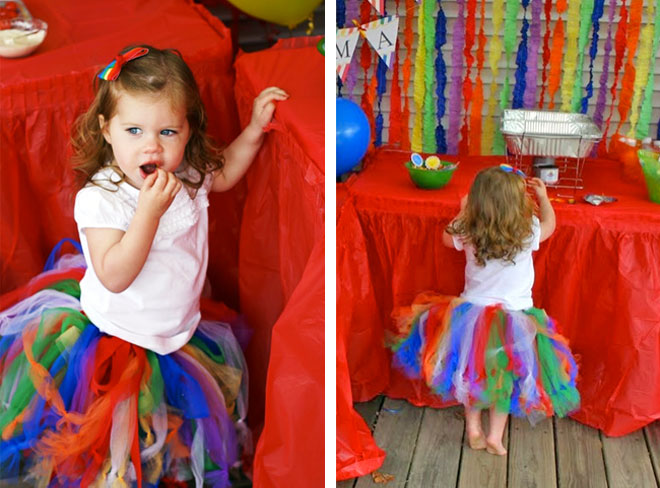 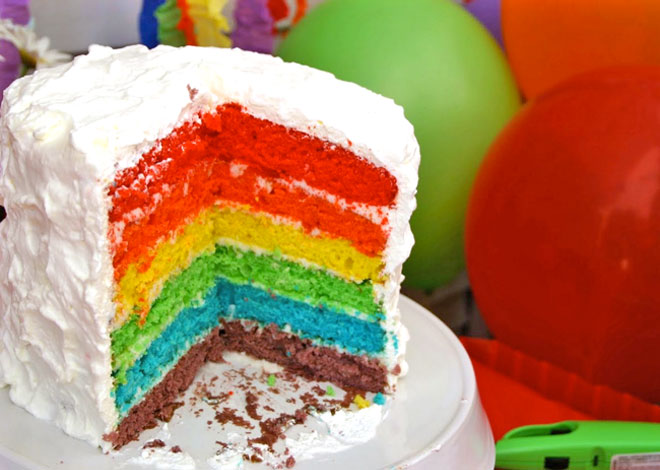 The rainbow cake was homemade – and gorgeous! 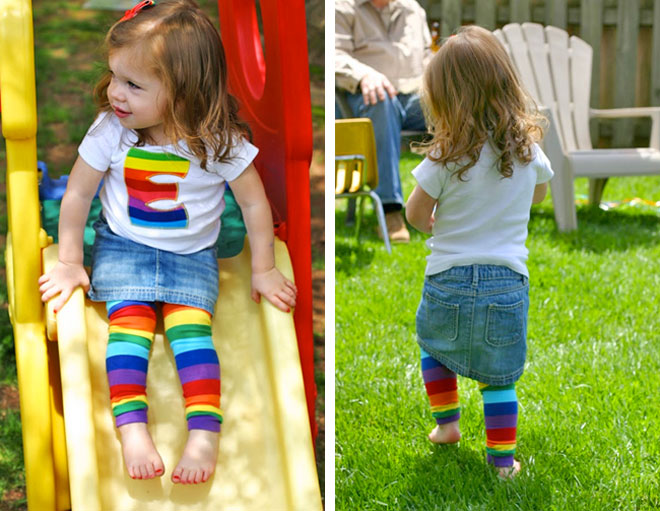 The birthday girl had not one but TWO special rainbow outfits for the day. Her custom-made rainbow top and leggings are from Etsy. 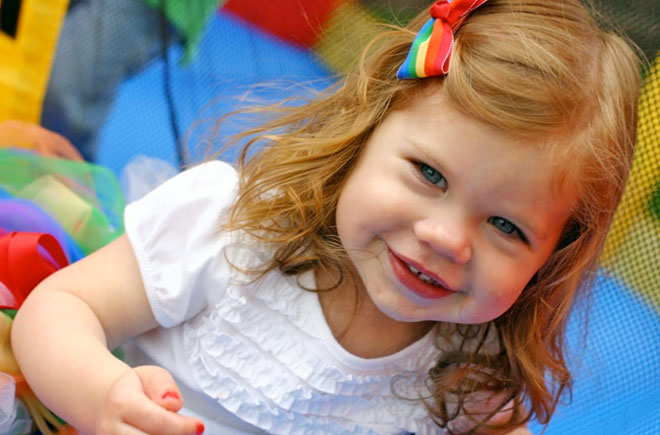 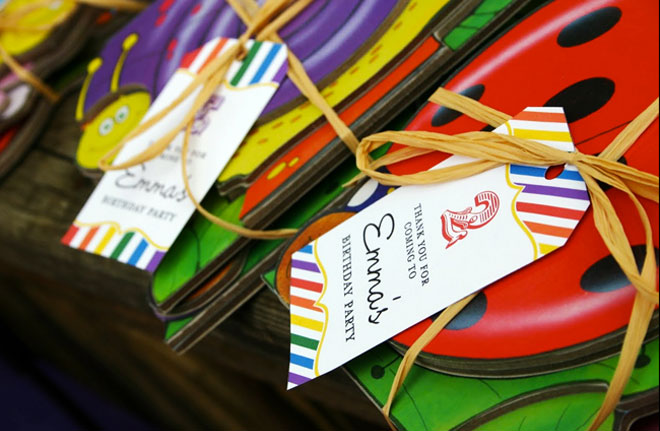 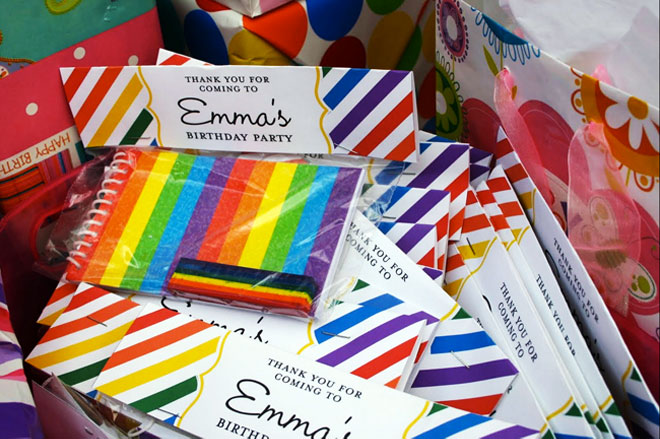 …and large rainbow crayons and glittery rainbow notepads from Oriental Trading, packaged together in a ziploc baggie and finished with a printable treat bag label. 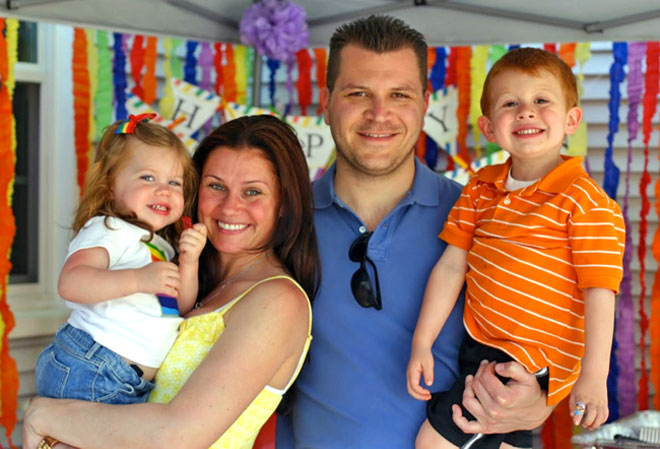