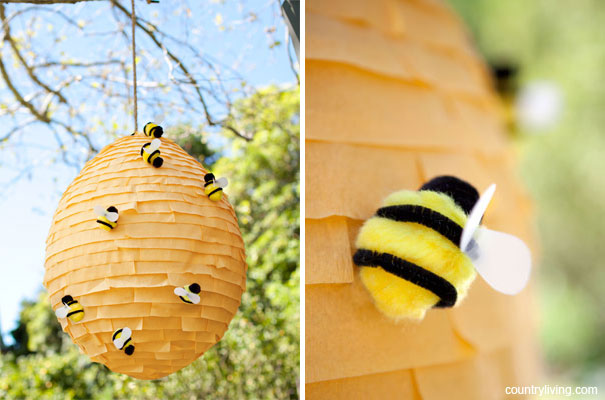 Just too precious! This bumblebee piñata is a DIY tutorial shared at Country Living, with instructions for both the hive and the bees. The piñata starts with an oversized balloon, and overall it only costs $10 to make the whole project – bees and all!

Step 1: Inflate a 24-inch-wide balloon; set it atop a large bucket so that the balloon’s narrow end rests just inside the bucket.

Step 2: Cut newspaper into 3″L x 1″W strips (you’ll need about 200 strips total). In a bowl, mix equal parts school glue and water. Working one strip at a time, dip paper into the mixture and immediately place on the balloon. Once the strips are dry to the touch (about an hour), turn the balloon upside down and cover its narrow endâ€”stopping a few inches from the top to leave a four-inch-wide opening (where you’ll later insert candy). Allow to dry completely, about six hours. Repeat with two more layers on both ends, allowing six hours of drying time between each layer.

Step 3: Use a pin to pop the balloon, then tip the hive over to empty. Set the hive back in the bucket and fill with candy.

Step 4: Create a hanger for the hive by making two small holes at the narrow end with an X-Acto knife, on opposite sides near the opening. Cut a four- foot-long piece of twine; thread one end through both holes and tie off near the top of the hive, leaving enough twine for hanging.

Step 5: Close the open end using six-inch-long strips of papier-maÌ‚cheÌ, applying a total of three layers and allowing for drying time between each.

Step 6: Cut honey-colored crepe paper streamers into three-inch-long strips. Glide a glue stick along each strip; then, starting at the bottom of the hive, affix in a horizontal pattern until the hive is covered.

Step 2: Cut 2 two-inch-long pieces of black pipe cleaner, then wrap each around the yellow pom-pom, leaving about a half-inch between the pipe cleaners. Hot-glue ends in place. Finally, fold a piece of vellum paper in half and cut out a one-and-a-half-inch wing shape (as shown). Unfold and attach the creased center to the bee’s body, just above the stripe nearest to its head, with hot glue. Repeat to make additional bees, then hot-glue them onto the pinÌƒata.