LEGO® party planning mamas, look no further! I’ve put together a handy-dandy (and dare I say ultimate) list of LEGO party games! There are so many fun ways to keep kids entertained with LEGO bricks, or with themed games like “Pin the Head on the LEGO Guy.” There are timed games, races, creative projects, and more. I’ve provided the links back to where I found each idea, so be sure to click on through each link for more party ideas too. Enjoy!! 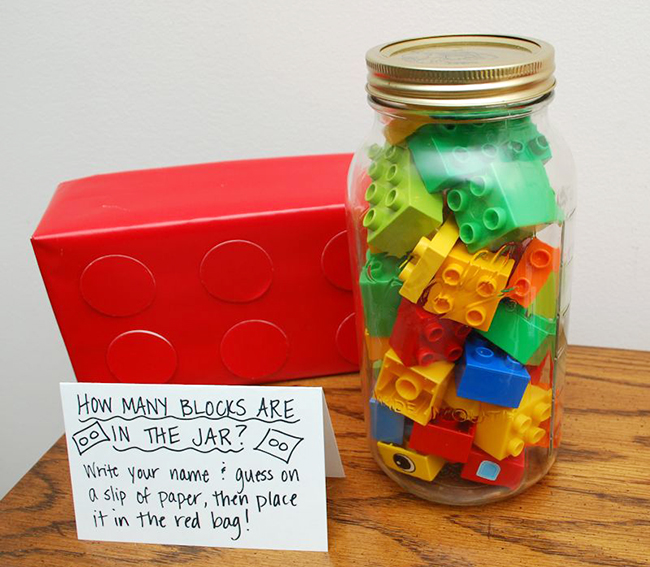 Guess the number of LEGO bricks in a jar

A classic (and easy) game! – via One Artsy Mama

Give each child a plate of LEGO blocks and a set amount of time to build. When time’s up, vote for who made the most imaginative creation, best animal, most creative vehicle, tallest building, most colorful creation, most unusual shape, etc. – via That Mom Blog

Supply enough LEGO figure parts so that there’s one minifigure per child plus plenty of spares. Sort the parts into containers, i.e, heads in one container, legs in another, etc. Pass the bowls from child to child and have them select a part from each so that they can design their very own minifigure. Their finished creation can be part of their take-home favor bag! – via A Typical English Home 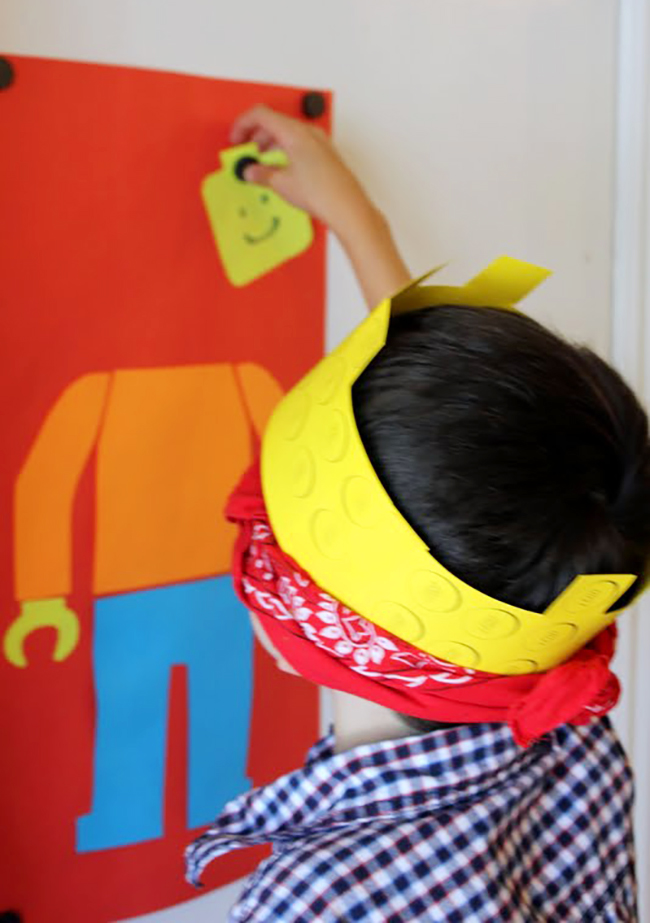 Pin the Head on the LEGO Guy

Paint a LEGO guy’s body on a large sheet of posterboard, and give kids separate heads – via Abide With Me 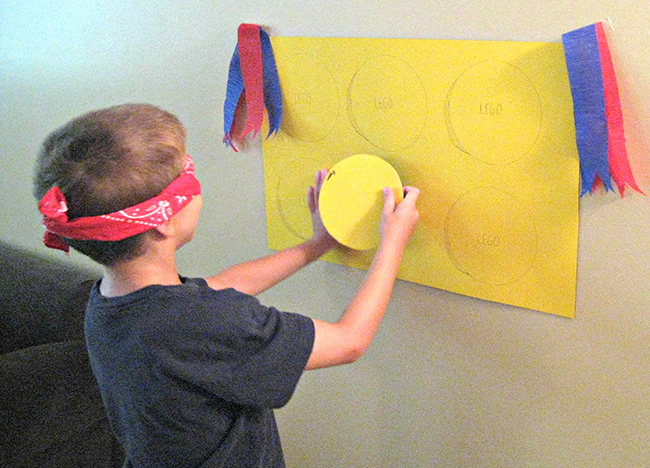 Pin the Spot on the LEGO

An easier game to make and just as fun to play! – via Moneywise Moms

Use two long, thin LEGO pieces to make a pair of “chopsticks” for each guest. Cross them in an “X” shape and bind them tightly together in the middle with a rubber band. Squeezing the top part of the sticks together should make the bottom halves pinch together. Fill several bowls with an assortment of small objects like big buttons, erasers, crayons and LEGO bricks. Have 3 or 4 kids at a time use their chopsticks to pick up as many objects as they can in one minute. The child with the most objects at the end wins! – via LEGO®

Place two bowls in front of each player: one filled with LEGO blocks, and the other empty. Give the kids one minute to move as many LEGO blocks as they can from the full bowl to the empty bowl using chopsticks. – via Wind Inspired 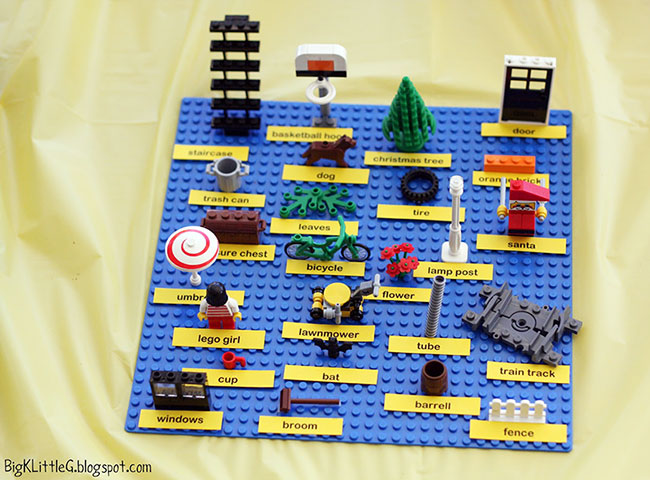 Label about 25 LEGO pieces on a board. Give everyone a few minutes to memorize as many pieces as they can. Take the board away, and whoever can write down the most items wins. – via Big K Little G

Pin the Face on the LEGO Head

A free printable game where you pin features onto a LEGO head. Made by A Typical English Home – download here.

“Give each child a small pile of LEGO bricks and have them sit in a circle on the floor. Put one brick in the middle. Going around the circle, each child adds one piece from their pile to the top of the growing tower. How high can they build it before it topples over? The more the merrier for this one!”  – via LEGO® 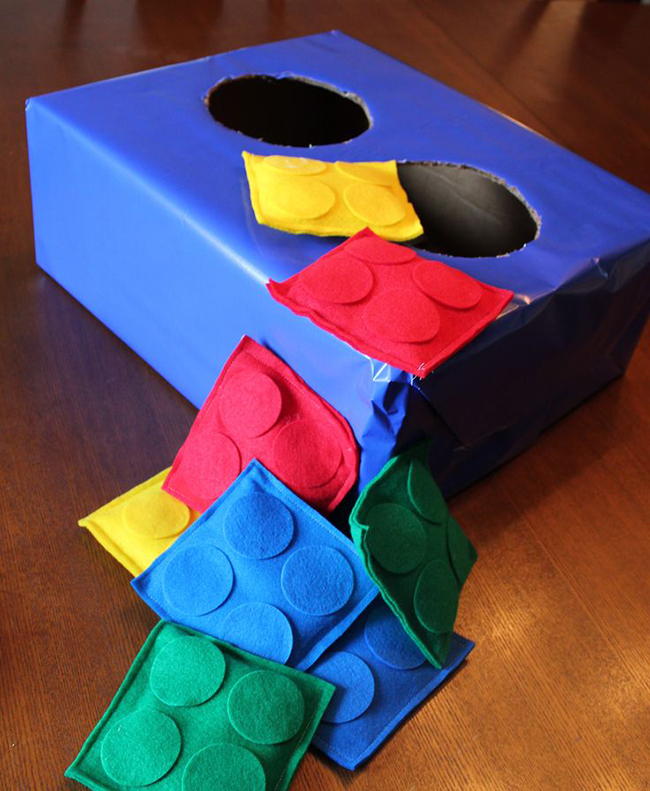 Cover a cardboard box in paper and cut two holes in the top to resemble a LEGO block. To make the beanbags, cut squares and circles out of felt and glue the circles to the squares to make LEGO blocks. Fill a small Ziploc bag with rice, place it between two squares, and sew together at the edges – via Stamp With Heather

Can You Build It?

Before the party, build a few simple LEGO structures. Put out a big bowl of LEGO blocks, set a timer, and see how fast the kids can recreate each example. Whoever builds a duplicate structure first wins. (Or, to make it non-competitive, just leave off the timer.)

Hide an assortment of LEGO bricks and let the party guests search for them. For younger kids, count the number of bricks they bring back. For older kids, you can award point values to the different brick colors and have them compete for a high score. – via LEGO®

Split the kids up into teams of 3 or 4. Give each team 25 LEGO blocks and have them pass all the bricks from one member to the next and then back again through paper towel tubes. – via Wind Inspired

Wrap a small LEGO set to look like a LEGO brick (use bright paper and draw circles on top). Play some music and pass the brick around. When the music stops, whoever is holding the brick is out (perhaps with a small consolation prize, like a piece of candy). The last one in the game wins and can unwrap the brick to get their prize. – via How to Cook That

Have each child build a small LEGO car. For little kids, have sets of wheels already attached to flat panels to save time. Do a show-and-tell with each child showing off their car creation, then race the cars across a table or down a ramp. 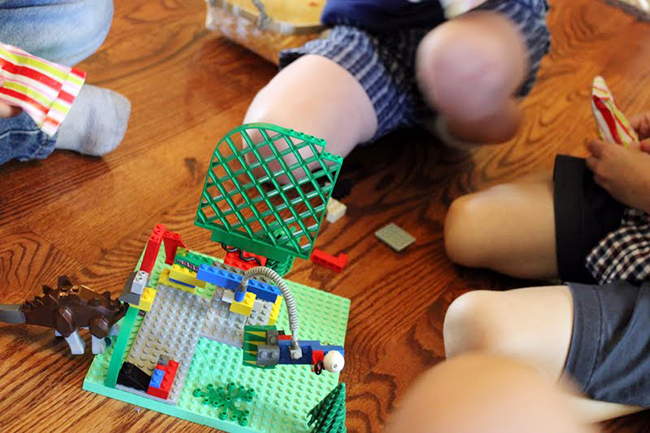 Wrap up separate small bundles of LEGO bricks for each child at the party. For variation, make some bundles have just one or two blocks, and some have lots more. Have the kids take turns opening a bundle and adding their blocks to the group LEGO project. – via Abide With Me

Same as the above, but instead of wrapping up bundles of bricks, roll a pair of dice to see how many LEGO bricks you get to add on your turn.

A printable bingo game using LEGO pieces to cover the board. Made by How to Cook That. 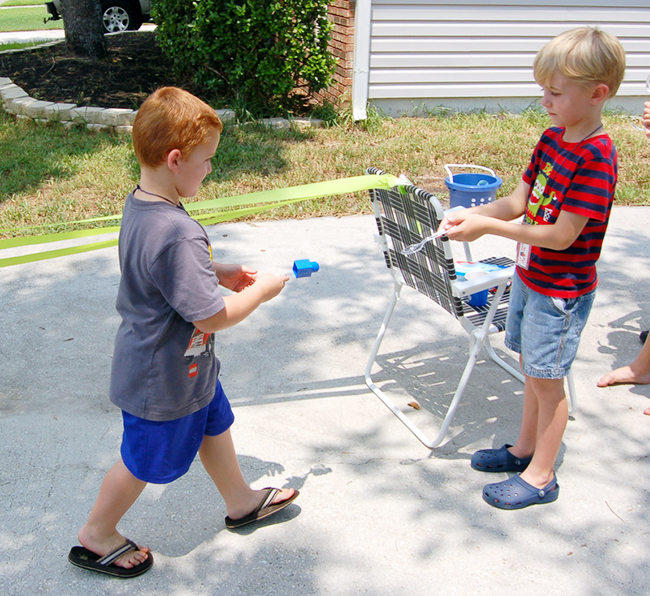 Divide all the party guests up into 2 teams. Give each team 2 spoons and 1 large LEGO brick. Have them relay race the LEGO back and forth until each team member has a turn. Whichever team finishes first wins. – via Meaningful Menagerie

Set up bowls – half filled with LEGO bricks, and half empty – and set them at opposite sides of the yard. Divide kids into teams. Each team needs to transfer the LEGO bricks from the filled bowl to the empty bowl by carrying the bricks in a spoon. The team that transfers all of the bricks first wins! (For smaller kids, have them transfer their LEGO bricks in a plastic cup.)

What Can You Make?

Give each child an identical set of LEGO bricks and see what each of them can make. Have them compare their creations and tell the group about what they made and why. 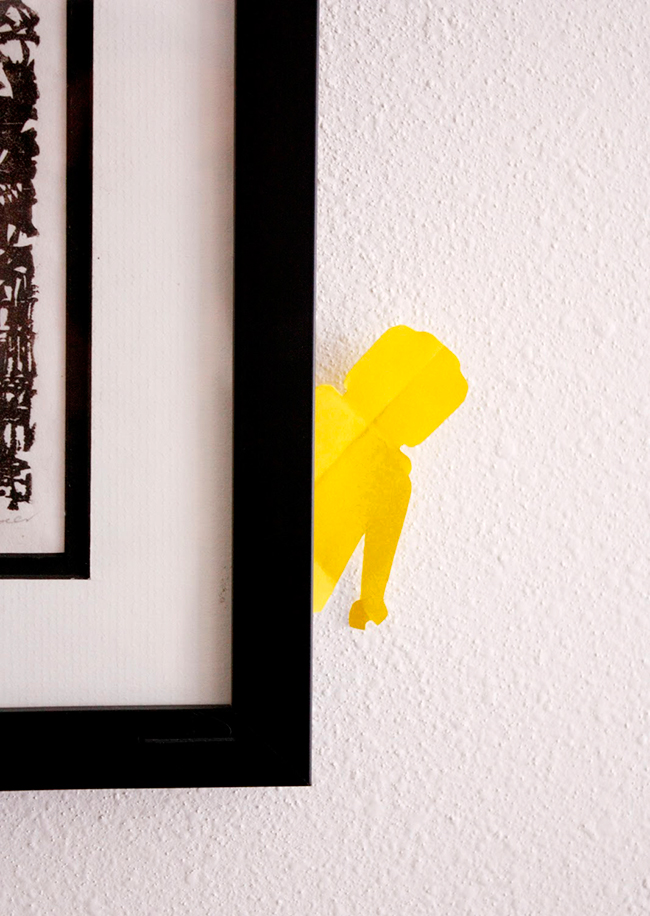 I Spy The LEGO Guy

Cut out paper LEGO guys and hide them in various places around the room. Have kids find them, and repeat! – via Delia Creates

For the littlest munchkins – provide a bowl of large LEGO blocks and lay out squares of construction paper in LEGO colors. Have them sort the LEGO blocks by placing them onto the corresponding piece of paper. – via Kids Activities Blog

There are tons of great coloring pages available via LEGO.com! (Click on the tab that says “Products, Games and More.”)

LEGO, LEGO, Who’s Got The LEGO?

Have one child be “it” and leave the room. The rest of the kids decide who is going to hide a LEGO in their hand. Call the “it” child back into the room and have them guess who has the LEGO. Once they figure it out, the child who had the LEGO is now “it.” The kids love it because they all get to pretend to have a LEGO to fool whoever is “it.” – via Delia Creates 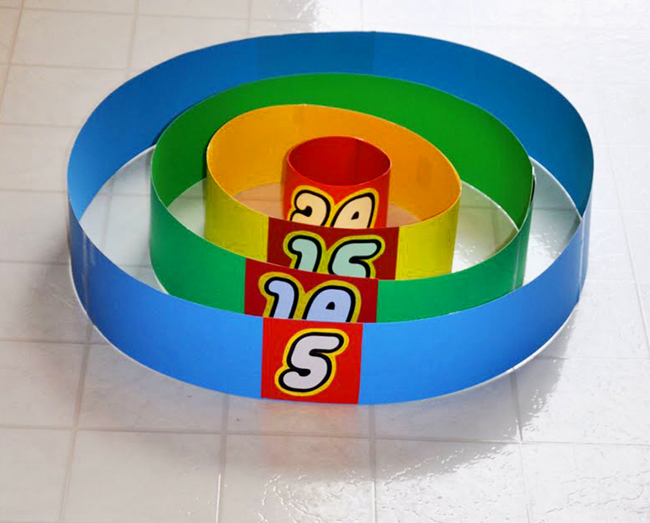 Tape poster board strips together to create concentric rings. Give each party guest 10 LEGO bricks and have them stand behind a line to toss them. The child with the most points wins a prize. (This game works best on the carpet.) – via Homemaking Fun

Give each child a bucket of LEGO bricks and see who can build the tallest LEGO tower in 90 seconds. The highest tower wins a prize! – via Moore Minutes

Have everyone build the tallest tower they can. If your tower falls over, you’re out. Keep playing until there’s only one LEGO tower left standing.

Have kids take as many or as few LEGO bricks as they’d like from a large bag. (This is even more fun if they can’t see what’s in the bag!) The only rule? They have to make a LEGO creation out of ALL of the bricks they choose.

LEGO® and the Brick and Knob configurations are trademarks of the LEGO Group of Companies which does not sponsor, authorize or endorse this blog post.