How to stage a birthday photo

It can be a really nice touch for a birthday invitation to include a staged photo of the birthday boy or girl! And, given my line of work, I see a lot of birthday photos. A LOT. So, I’ve noticed several trends when it comes to how the photos are set up. Generally, the same kinds of props are popular (because what’s a more appropriate prop for a birthday photo than a cake or balloons?) and unfortunately, the same types of mistakes are common, too. For example, I’ve seen many photos where birthday balloons soared 6 feet over a baby’s head, with a whole lotta blank wall in between. Which means, if you want the birthday child AND the balloons to show on your invitation, your child’s face is going to end up being teeny teeny tiny, and that blank wall might’ve just stolen the show. Or, to zoom in on your child’s face would mean cropping out the props you chose, and you might as well have skipped using them at all! That’s a bummer, too.

Now, let me just say I know how hard it is to take photos – I am not a photographer; mostly I just try to take pictures of cupcake toppers and other printables I design, and even that’s a challenge for me. But, I do recognize good pictures when I see them, and I’m pretty decent at drawing silly cartoons. ; ) So, I thought it might be a useful tool to have a little cartoon guide to staging a birthday photo! There are two main points to remember, I think: Keep the props at an appropriate height, and edit your props wisely.

To help illustrate these points some more, I’ve borrowed some photos from Tracey Spencer of Tracey Spencer Photography, who is amazing at scaling a photo shoot down to toddler size and double-amazing at her creative (but never distracting) use of props. It’s actually this photo – sent to me by a sweet customer to use on her Pretty in Pink invitations – that made me want to write this blog post. I saw this photo and thought, now THAT’S how you do it! 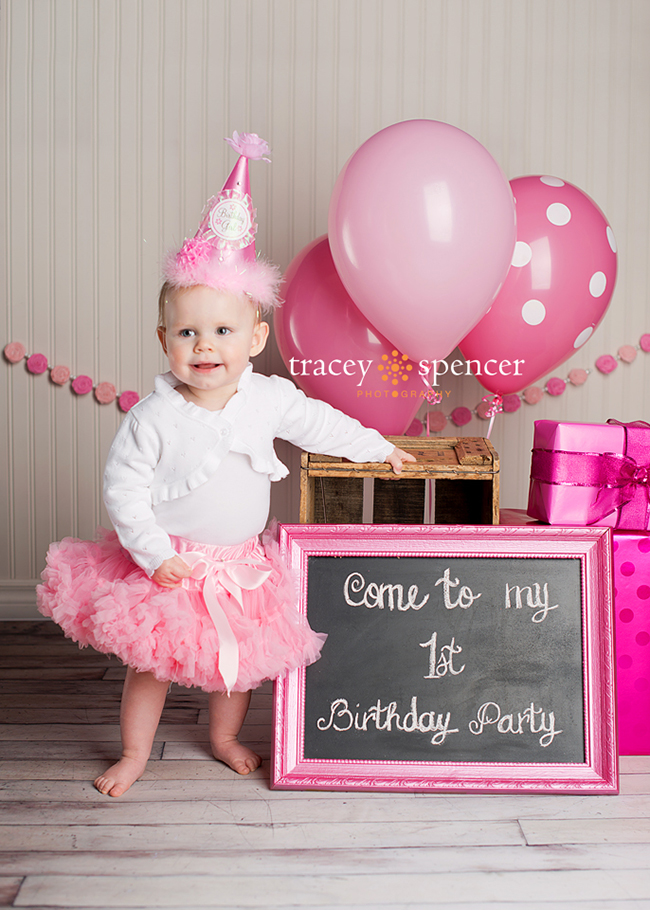 There’s a lot happening in this picture – balloons, a hat, a banner, packages, a crate, a “come to my party” sign – but it all works. One of the keys is that it’s monochromatic (everything is pink, obviously), but the most important thing to note is the perspective. To a standing adult this would’ve looked entirely different – the balloons would be at what, waist height at most? But it’s all the perfect perspective once you get down to baby level. (Baby level is key!) By hanging the banner low and keeping the balloons low, the sweet baby in the photo actually looks tall, which is good! You can’t miss her – she’s the center of attention. She looks natural in this set-up because it’s her size. 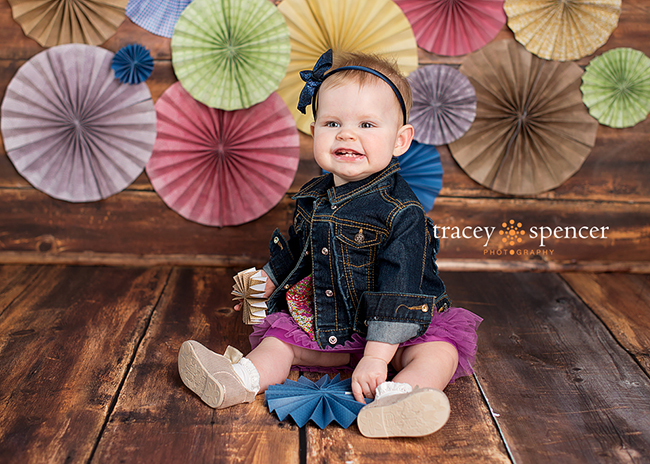 There are about 6 inches between the bottom of those paper rosettes and the floor. The rosettes would’ve looked crazy-low to you if you were standing up. But for a seated baby, that’s just where they need to be! 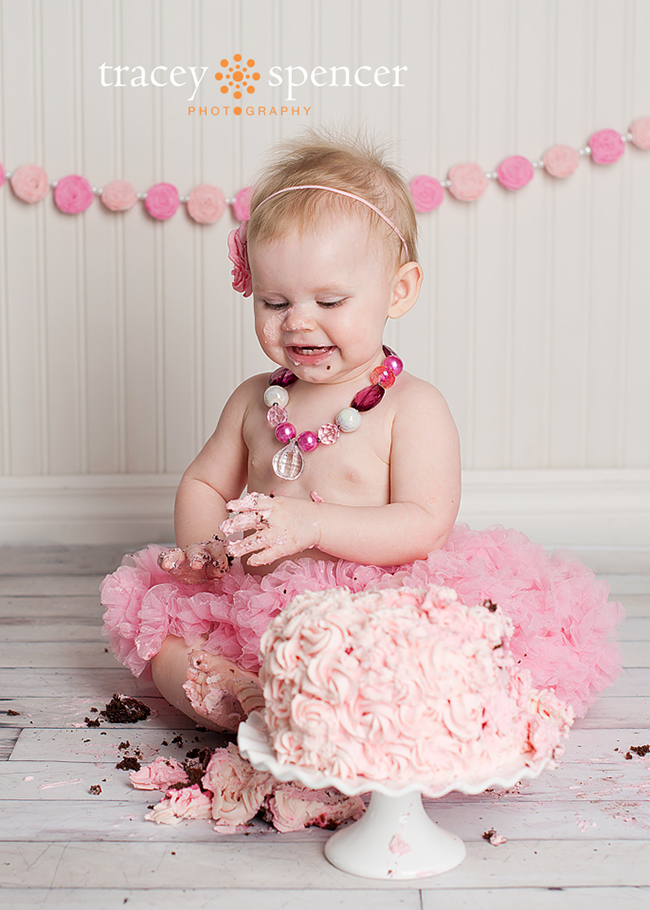 Another trend I see is that a lot of people are afraid to let elements of their photos “overlap.” But, you don’t have to see the whole tutu, the whole banner, etc. This photo is a perfect example of that – look how having the banner behind this cutie-pie’s head actually draws more attention to her face! 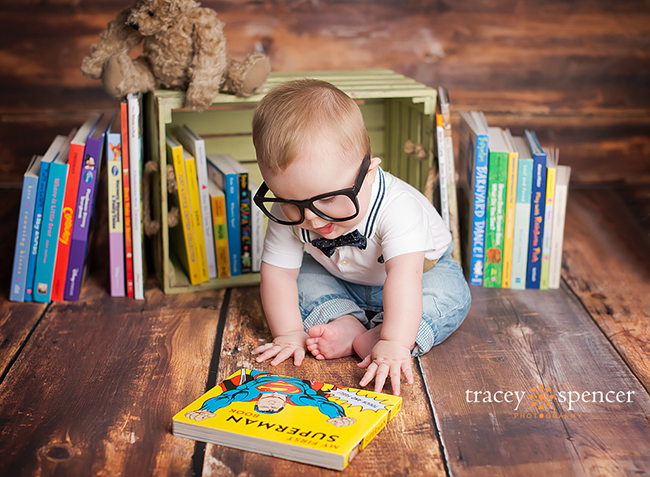 This Superman theme photo is just the sweetest example of a themed shoot! Plus, again: it’s all about baby level. A regular bookshelf would’ve been too high. Putting the teddy bear on a chair would’ve been too high. And notice how Tracey wasn’t afraid to crop out the top of the teddy bear’s head. It’s not necessarily about fitting all the stuff in: it’s about keeping the emphasis on the subject.

This is just amazingly precious! And the banner is not too high! (Say it with me one more time: baby level.) ; ) 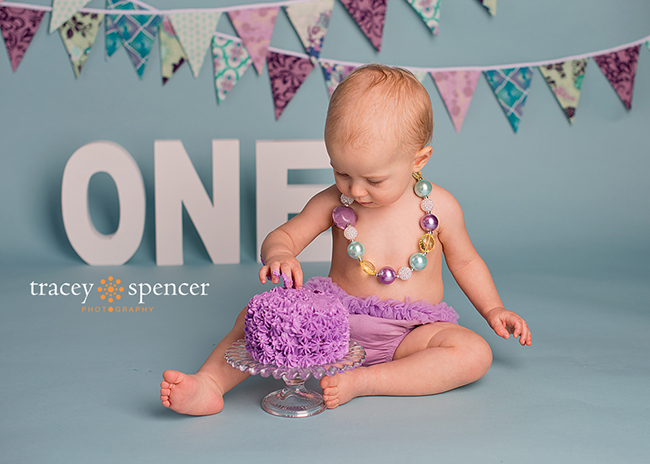 I love this example of a simple and sweet cake smash! Note that the banner and the “ONE” letters are far in the background – this shows that the props you use don’t all necessarily need to be right next to the baby. Props can be just as effective in the background, too. 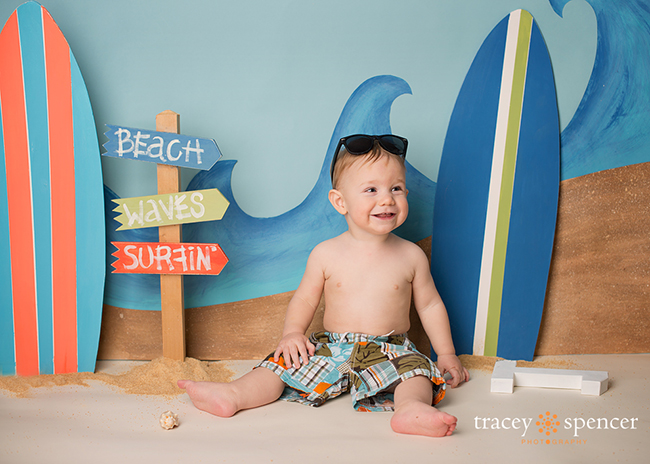 On the other side of the coin, here’s an example of how to successfully use several props, all sharing equal space with the subject. But, there’s still no crowding (see the third “no” example in my cartoon, hee!) and the props were carefully edited. Since they’re simple and stick to the same color palette, it all clicks.

I hope this little guide and examples have been helpful to you if you’re planning a photo shoot, or especially if you’re going to be taking the pictures yourself! You can do it, I just know it!! Go snap some pics and let me know how it goes! : )

Thank you so much to Tracey Spencer of Tracey Spencer Photography for her use of these photos (and for double-checking my cartoon before posting it for the world to see)! Tracey’s facebook page is one of my favorites, by the way – it’s just gorgeous baby photo shoot inspiration non-stop!