Want to make adorable Halloween cupcakes that aren’t hard to decorate? Me too! That’s why this recipe by Nina of Ambrosia Baking (site no longer live) caught my eye.

It’s that time of year again. It’s time to start thinking of costumes, making plans, and buying bags and bags and bags of mini fun-sized chocolate candies (I haven’t done this yet, but I plan on indulging in this sort of activity very soon). We’re about two weeks away from one of my favorite holidays ever. Halloween is coming, and it’s coming fast! 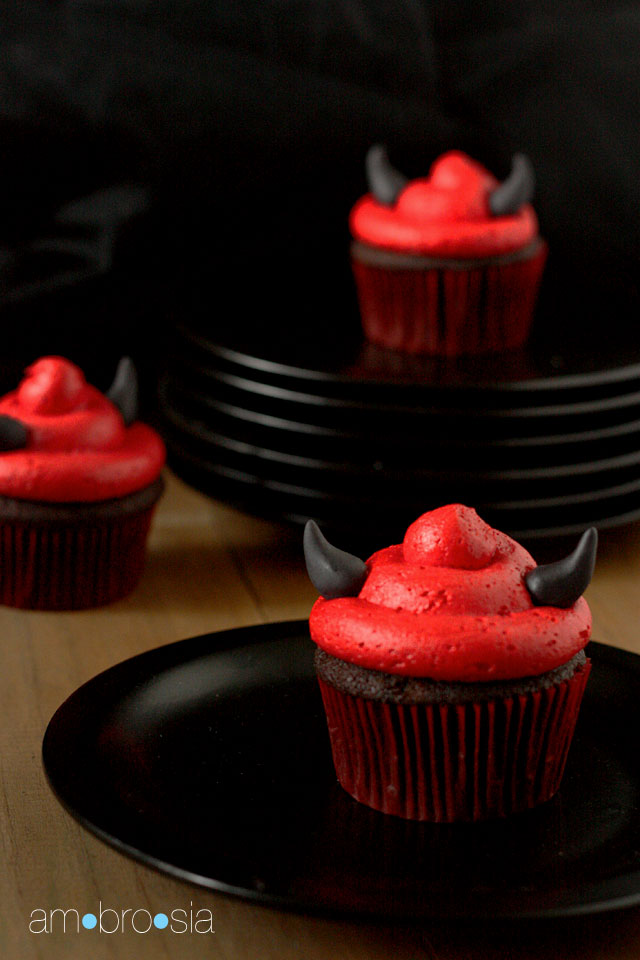 Last year, I went crazy with Halloween preparation, and made a ton of cupcakes in order to celebrate.  I went with more obvious Halloween themes, like pumpkins, candy corn, mummies, spiderwebs, and of course, these adorable little ghost cupcakes.  As much as I loved all the cupcakes I made last year, I knew that for this year, I wanted to go with a route that was perhaps a little more subtle. I took a cue from two very popular Halloween costumes, and decided to use them as my jumping off points, both for the cupcake decorations, as well as the cupcake themselves! For the first, a Devil’s food cupcake, decorated with a devilish combination of red vanilla frosting and black fondant horns seemed like a perfectly fitting, yet subtle, tribute to Halloween. 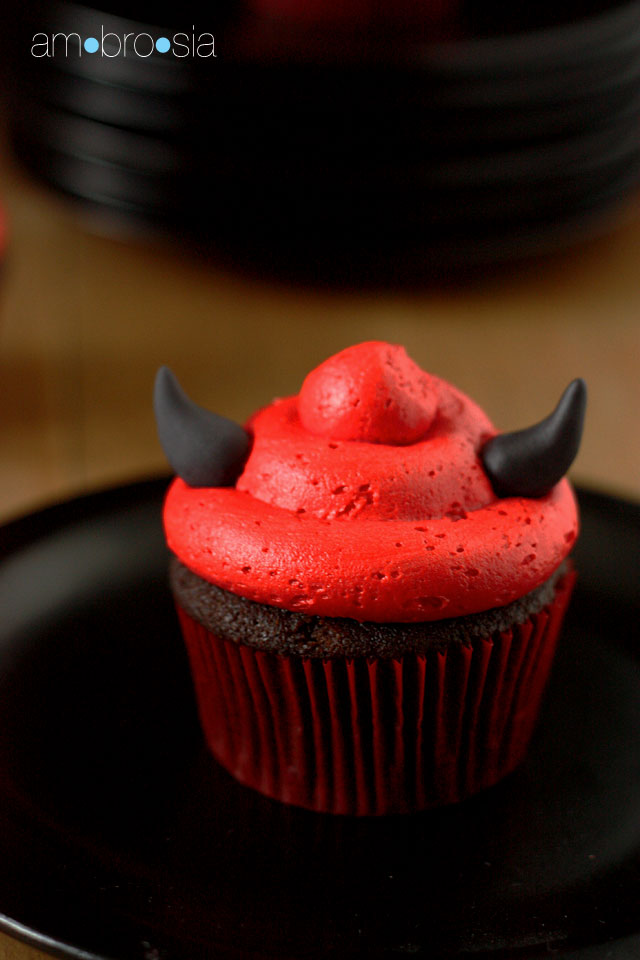 This Devil’s food cake recipe is definitely one of my new favorite chocolate cake recipes.  Yes, I know, I probably say this every time I try out a new chocolate cake recipe, but it’s definitely one of my favorites that I’ve made so far.  In case you’re wondering, a Devil’s Food cake is different from a more standard chocolate cake in that it uses boiling water instead of milk as its main liquid ingredient, and is flavored with cocoa powder, rather than melted chocolate.  Here’s some more fun facts: Devil’s food cake is similar to red velvet cake, in that they both use baking soda to give the cake a much deeper color, and traditionally, Devil’s food cake is made with shredded beets to help add moisture, sweetness, and of course, a natural, slightly reddish tint to the cake.  A rich, chocolatey, and slightly red cake deserves a name no less than Devil’s food.  While this version of Devil’s food that I used for these cupcakes contains no beets, it’s sinfully delicious anyway! 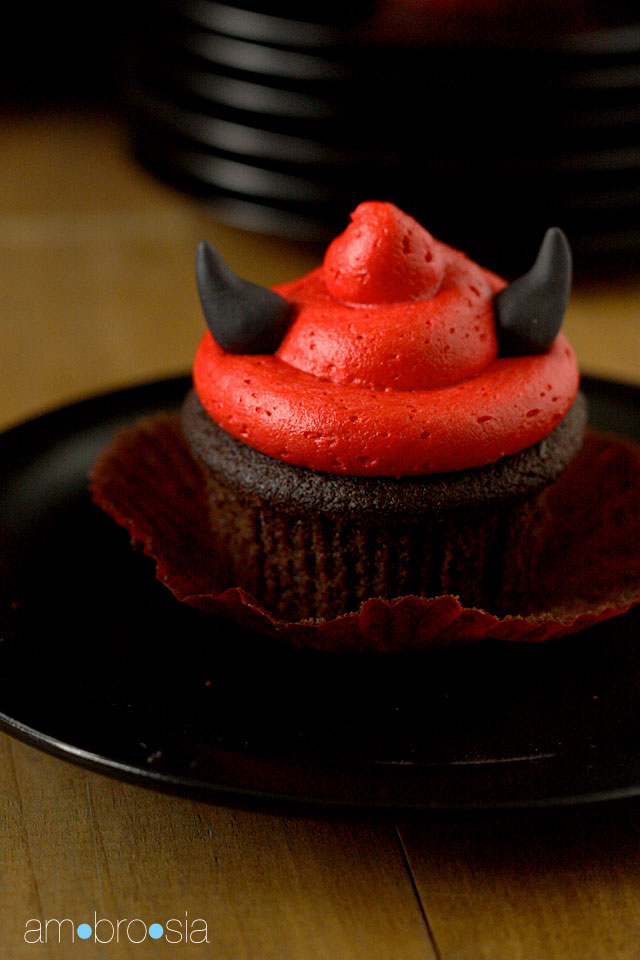 The recipe below makes about 24 cupcakes, but when I made it, I only made a dozen cupcakes, and used the remaining half to make a tiny and adorable 6-inch 3-layer birthday cake (if you follow me on Instagram, you should have seen it a couple weeks ago!).  That cake got a nice dose of chocolate frosting in between its layers, and while I definitely think that rich chocolate frosting is the way to go with Devil’s food, I made an exception this time. Because I knew I wanted to tint the frosting red, I went ahead and made a batch of regular vanilla frosting.  A word of caution here though; achieving a true and intense red color can be difficult, as the frosting may just end up looking bright pink, or end up having a very bitter taste.  If I’m using large quantities of red frosting, I like to use Wilton’s “No-Taste Red,” as this helps ensure that the food coloring doesn’t alter the taste of the frosting too much.  Another trick is to make the frosting one or two days before you are going to use it, and store it in the fridge in the meantime.  The frosting will turn a deeper shade of red as time passes, and when you’re ready to use the frosting, simply stir it really well in order to get it back to a creamy consistency.  The vanilla frosting is nice and sweet, and pairs perfectly with the Devil’s food cupcakes, which aren’t too sweet on their own.  These devilish cupcakes are a perfect way to indulge this upcoming Halloween! 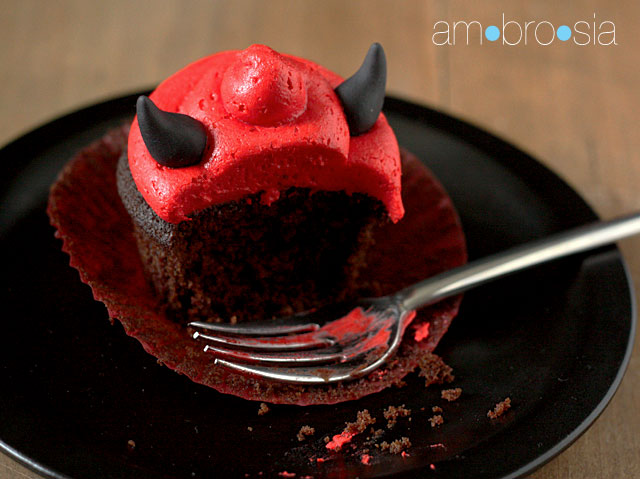 To make the cupcakes, begin by preheating the oven to 350 degrees F, and position a rack in the middle of the oven.  Line cupcake tins with paper liners.

In a bowl, whisk together the boiling water and cocoa powder until smooth.  Whisk in the milk and vanilla extract.  In a separate bowl, sift together the flour, baking soda, and salt.

In the bowl of a standard electric mixer, fitted with the paddle attachment, beat together the butter and both sugars until light and fluffy.  Beat in the eggs one at a time, beating well after each addition.  Begin to add in the flour mixture and the cocoa mixture to the creamed butter, alternating between the dry and wet ingredients, and making sure to begin and end with the flour mixture.  The batter may look slightly curdled, but don’t worry, this is what you want!  Mix together only until just combined.

Divide the cake batter evenly among the cupcake tins.  Bake the cupcakes in the oven until  a tooth pick inserted into the center of the cupcakes comes out clean, about 20-25 minutes.  Set the cupcake tins on wire racks, and allow the cupcakes to cool in the tins for about five minutes, before removing them and allowing them to cool completely on the racks.

While the cupcakes are cooling, prepare the frosting.  In the bowl of a standard electric mixer fitted with the paddle attachment, beat together the confectioner’s sugar and butter until the mixture begins to come together. Lower the mixer speed, and add in the milk and vanilla extract.  Increase the mixer speed to high, and beat the frosting until it is light and fluffy, about 5 minutes.  Add enough food coloring to turn the frosting a bright shade of red.  Once the cupcakes have cooled completely, frost the cupcakes with a large round tip (I used an Ateco 807 plain tip).  Take the black fondant, and begin to shape small bits of it into curved devil horns, and then place the horns on top of the cupcakes.  Enjoy!

New address label design! 😍 Want to add this to