I’m really excited about today’s featured party – it’s a new and exciting party theme (new to my blog, and new in the shop) – all thanks to my friend Brenda, who dreamed it up for her son Stavros’ 4th birthday! She took my rainbow theme and put a chalkboard twist on it. One of my favorite details is the line Brenda added to the birthday invitation: “Chalk it up to being 4!” Other details to watch for include the cloud-and-rainbows cake, the DIY canvases given as party favors, and the fabulous rainbow photo booth backdrop! 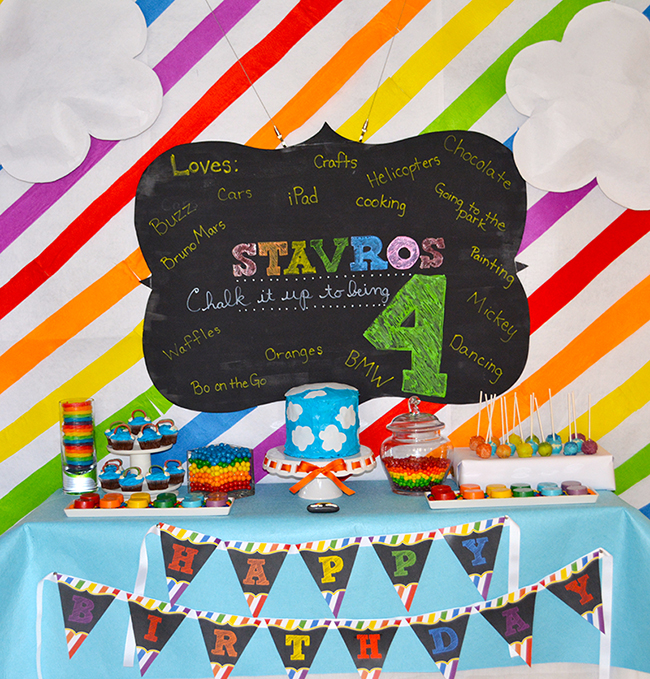 Brenda says, “I wanted to incorporate the invitation into the decorations, so I made the striped backdrop myself with felt and hot glue. For a little dimension, I added the felt clouds and stuffed them with felt pieces. I also cut the backdrop chalkboard using a piece of wood (yes, I used a saw–I even shocked myself!) and I painted it with chalkboard paint.” 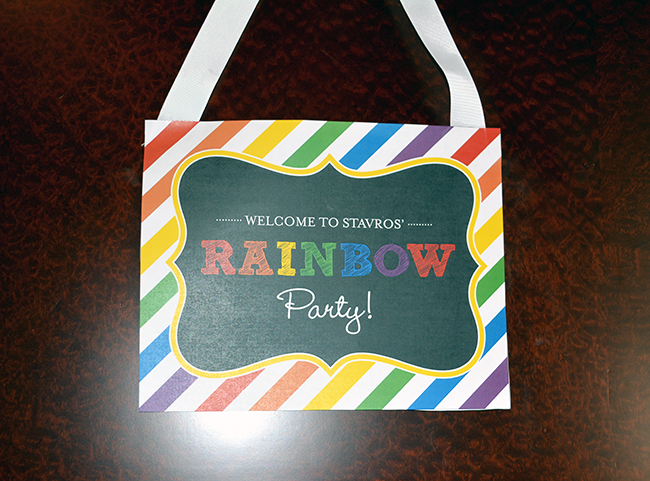 A printable welcome sign was hung on the front door, and was also displayed in the entryway next to a special picture of Stavros. 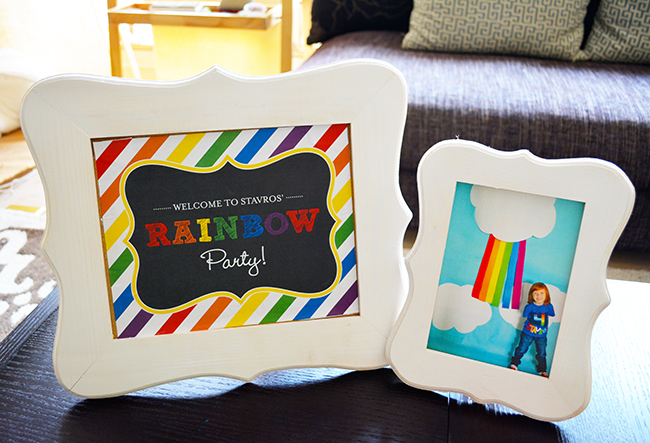 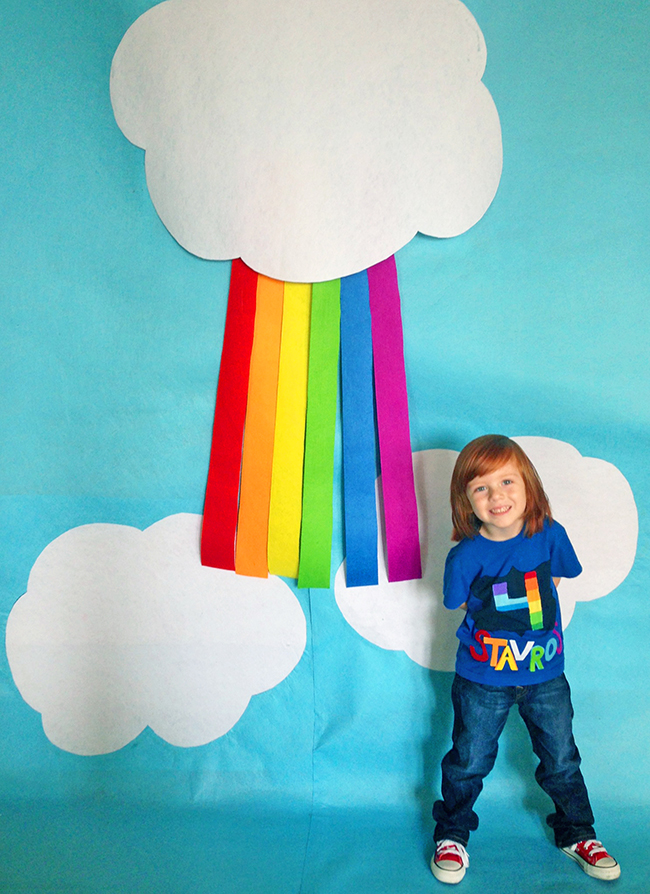 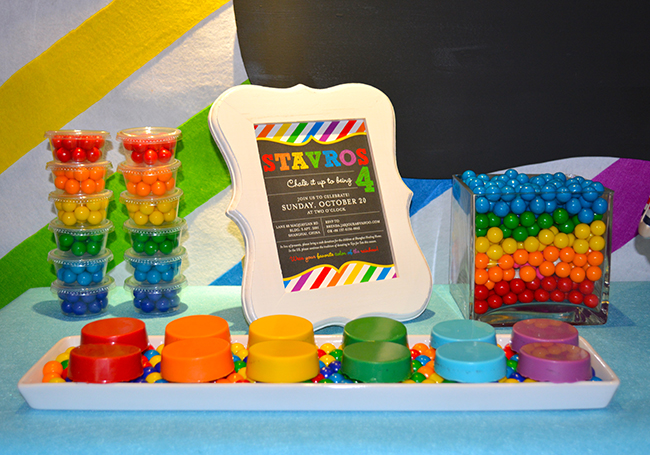 A framed copy of the birthday invitation was displayed on the sweets table. 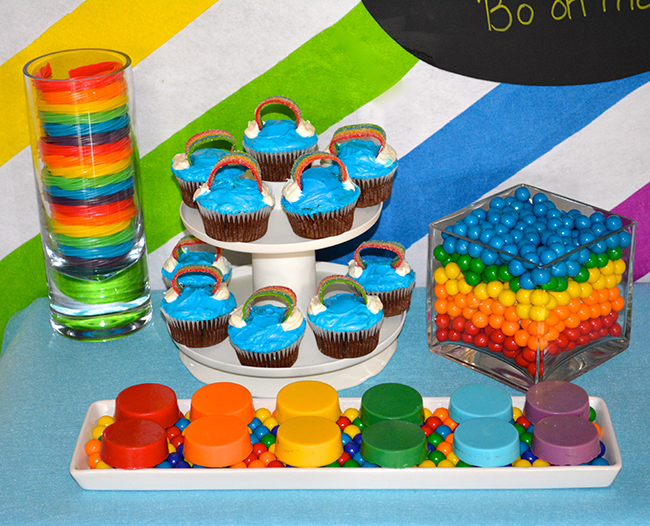 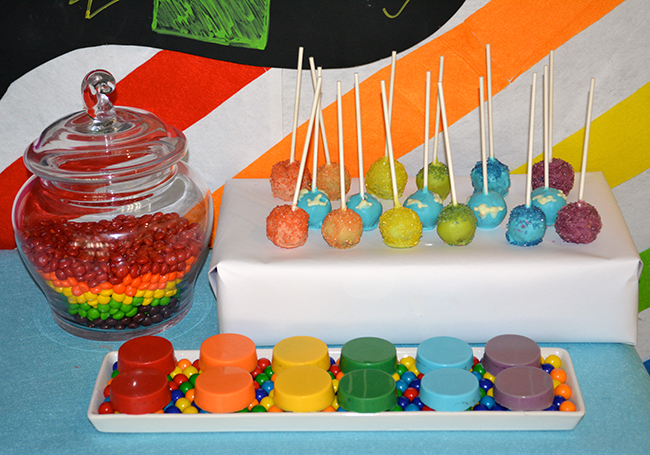 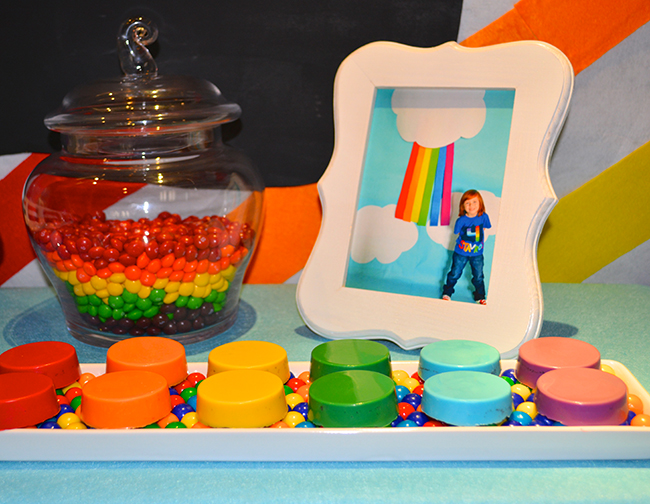 Brenda says, “The round discs are Oreos! I used a mold (from Amazon) and Wilton’s candy melts to make them – I was really happy with how they turned out, and they were so easy!” 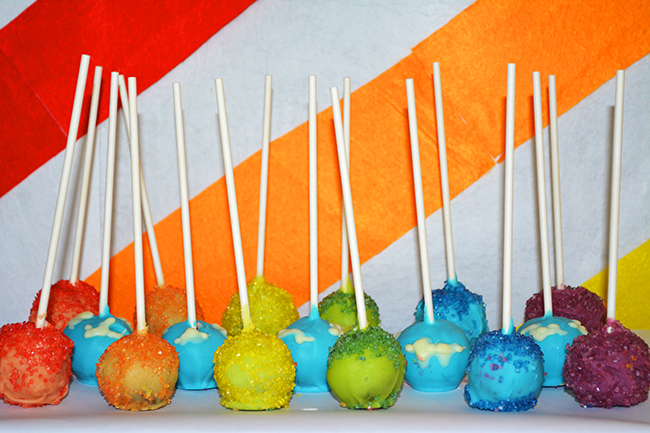 The cake pops came in every color of the rainbow (covered with sprinkles!), plus blue pops with white clouds. 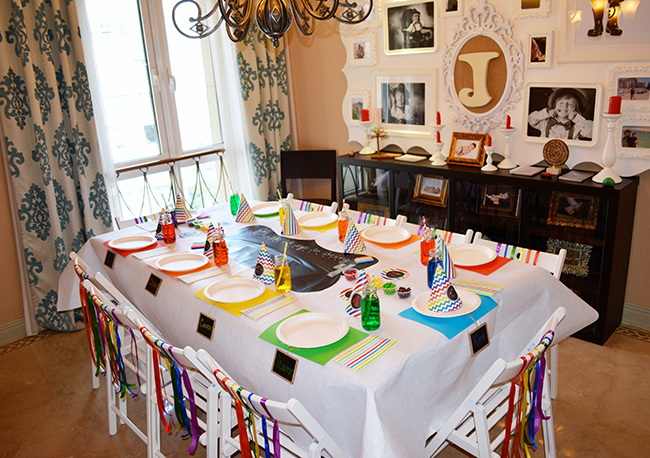 The kids ate together at a formal white table set with place cards. The centerpiece was a large chalkboard with chalk so the kids could draw or write messages. 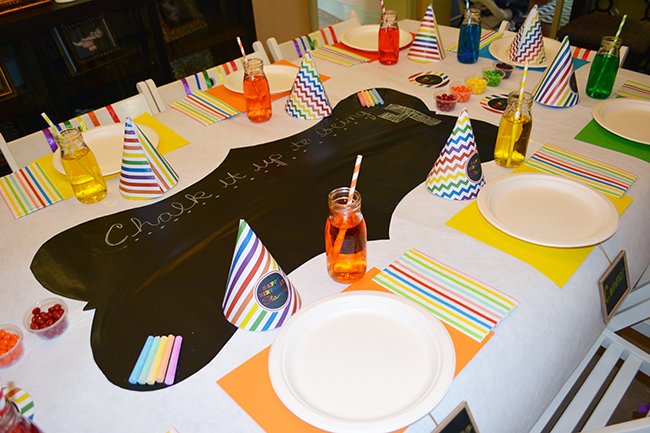 Each place setting had a colorful placemat with a matching bottle of punch and a paper straw. There were also party hats for everyone (Stavros had specifically requested party hats)! 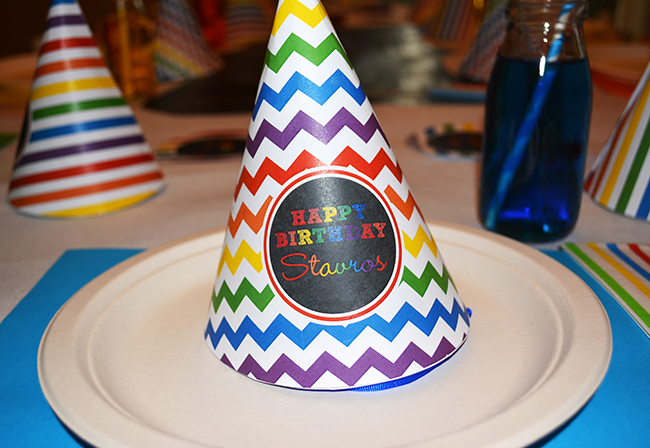 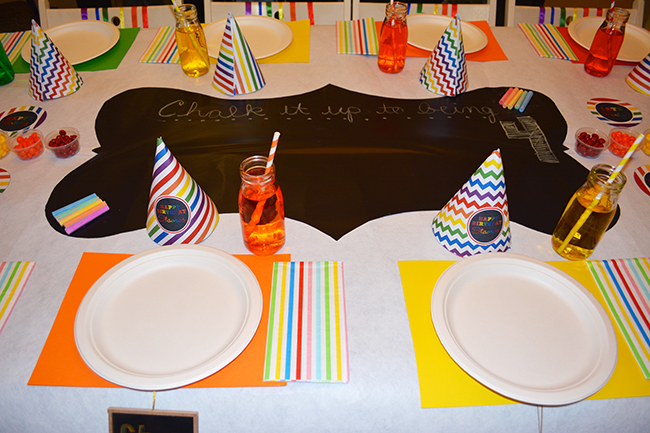 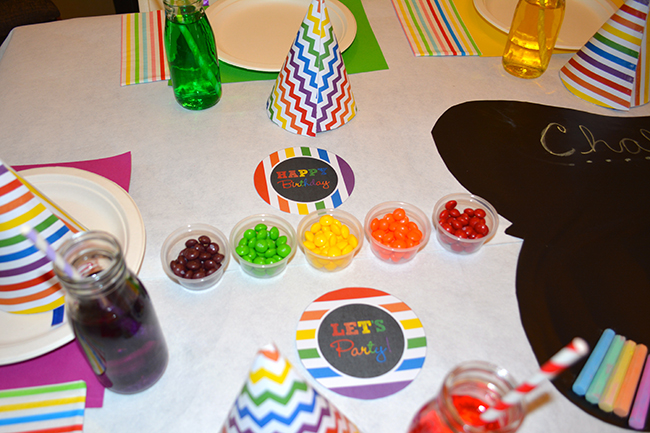 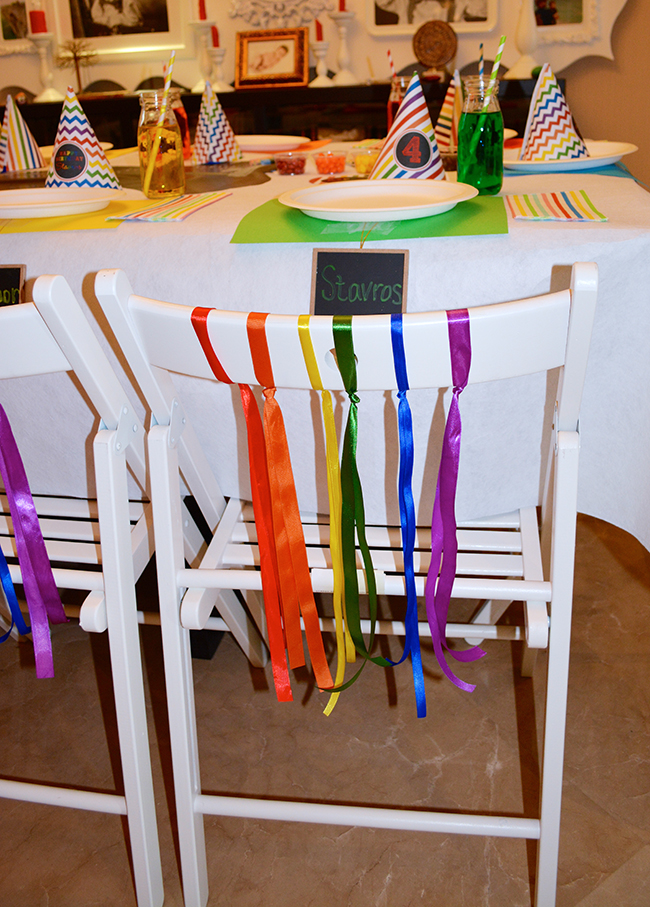 Brenda tied lengths of rainbow-colored ribbons on the back of each chair. A tiny chalkboard place card was hung in front of each place setting. 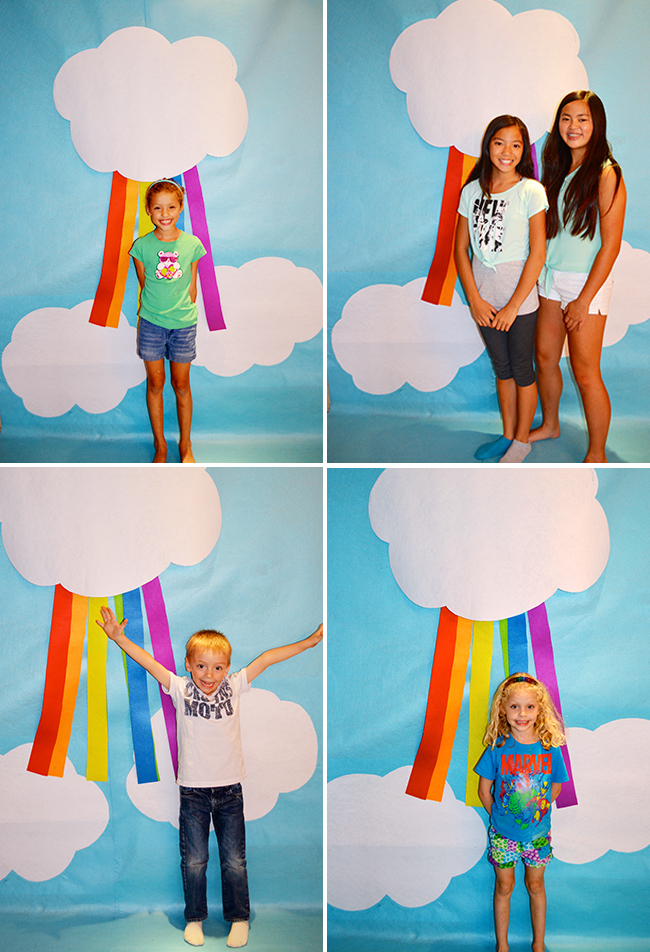 All the kids at the party had fun taking turns posing for photos in front of the rainbow and clouds backdrop. 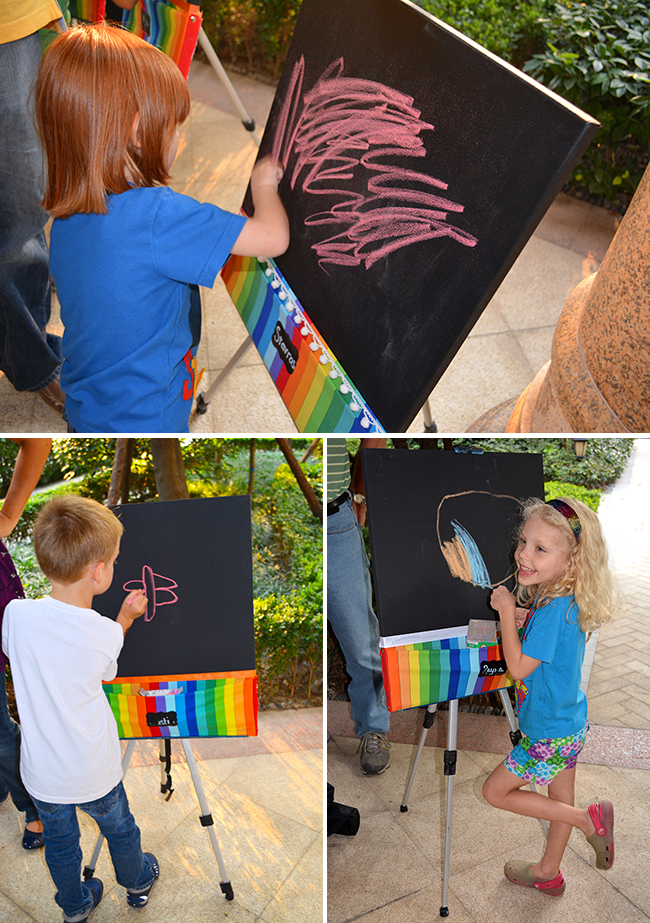 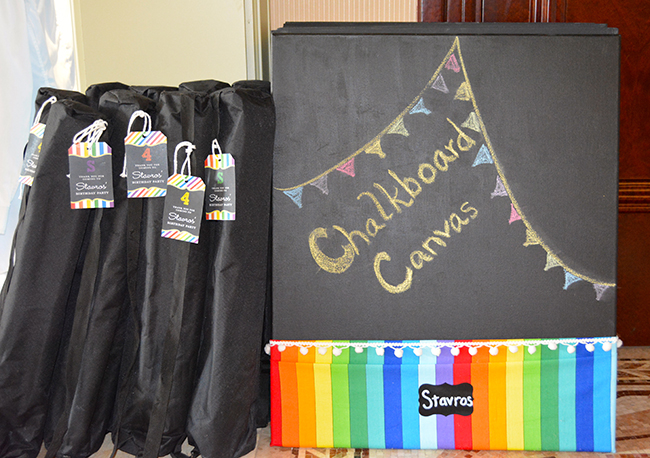 The easels came in black carrying bags, and Brenda added favor tags to each bag. 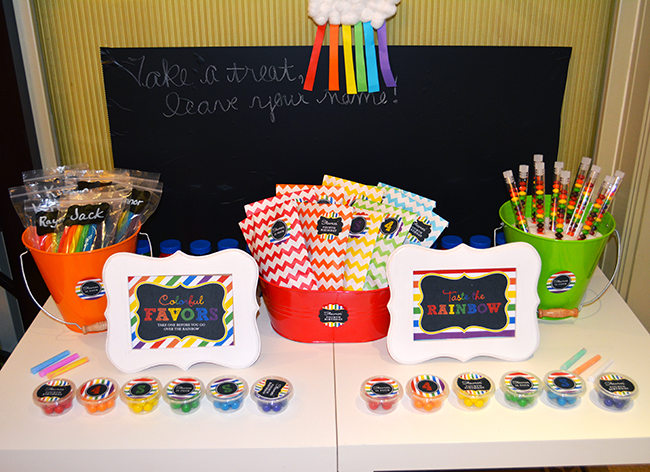 Besides the chalkboard canvases, there were lots of smaller party favors to take home as well, including bags of rainbow-colored Twizzlers, chevron treat bags filled with Trolli gummi candies, and tiny containers of Skittles. 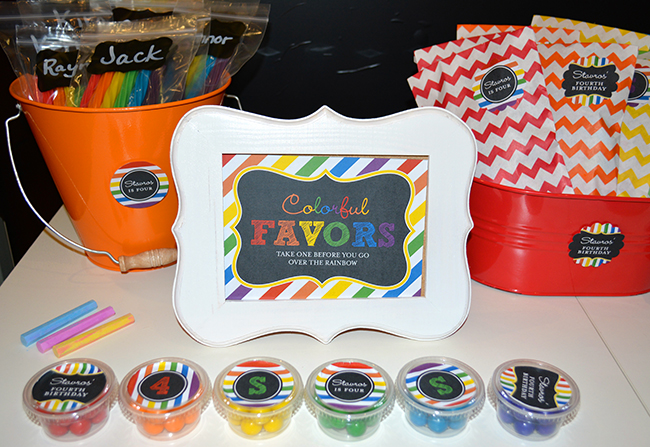 The printable signs in the frames and the printable circles on the favors are from Chickabug. 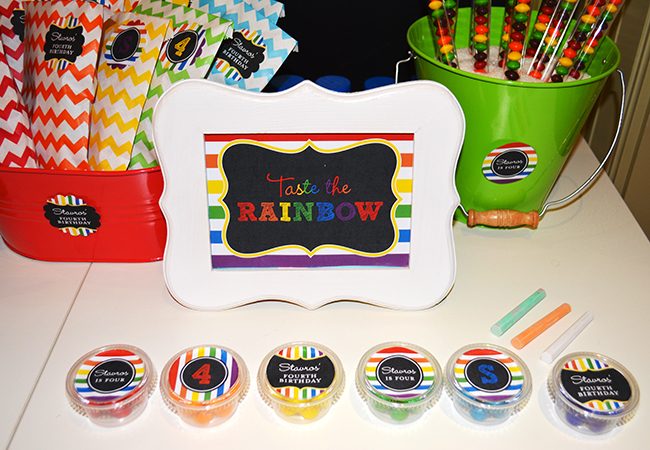 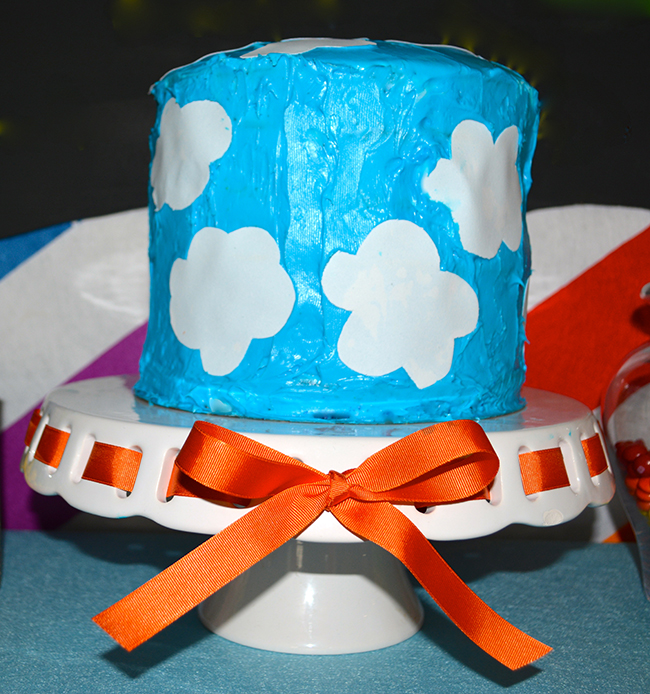 Brenda says, “I made the birthday cake myself. Initially, my plan was to make the cake look like the invitation, then I decided it would be fun to show no evidence of rainbows on the outside of the cake so there would be an element of surprise for the kids when I made the first cut. It worked! The kids loved it and Stav gave me the biggest, sweetest hug and thanked me for his cake (which made my week)!” 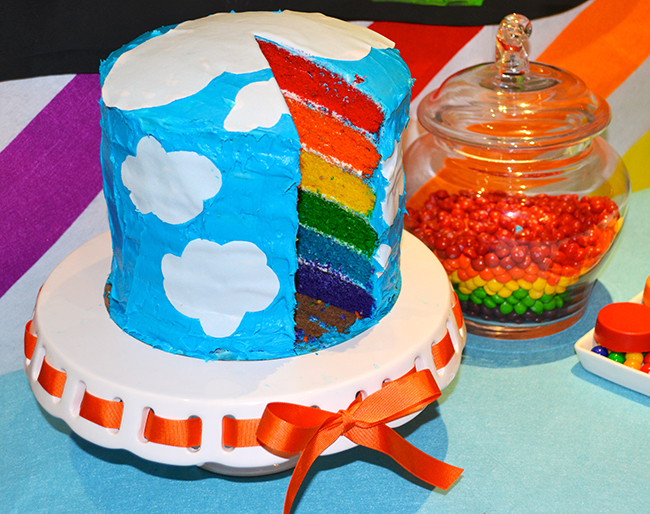 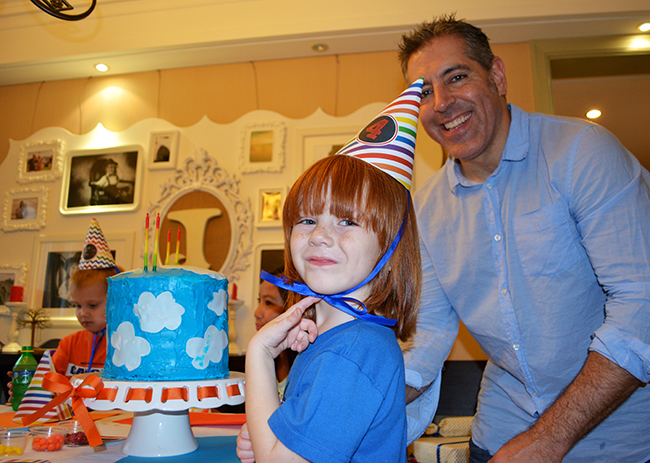 Thank you so much, Brenda! Happy 4th birthday to Stavros! : )