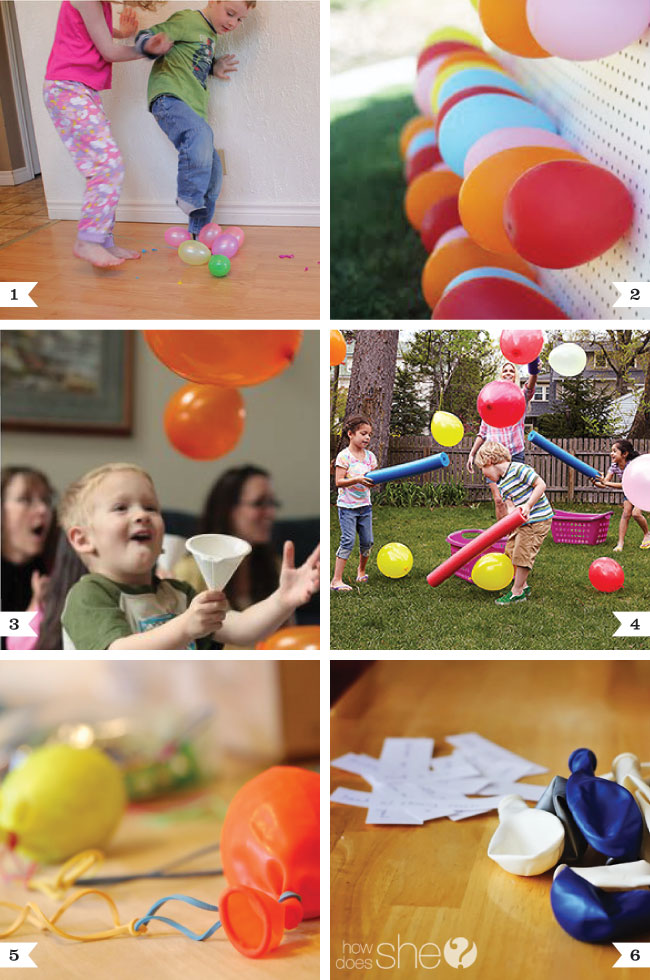 Kids’ parties always need to have a few planned games or activities, and often, keeping it super-simple is best. For example, for me, the birthday party game I remember most from when I was little involved following a long string of yarn through the house to find a prize. So basically, my mom created a lifelong memory with a ball of yarn and approximately two minutes of prep time. See? Nothing wrong with simplicity. ; ) Like with these balloon party games – each one is quick, easy, but would keep the kids super-happy (just look at that smile in photo #3!).

1. Balloon pop game via Three Jewels in My Crown – Tie a bunch of balloons to one leg on each child and see who can pop all their balloons first. “It’s actually quite hilarious to watch and extremely competitive!”

2. Balloon darts via Landee See, Landee Do – The classic carnival dart-and-balloon game, but DIY! “Made by putting the tied end of an inflated balloon through peg board and taping it on the back to keep it in place. The kids then threw darts in an attempt to pop two balloons to get their prize.”

3. Balloon catch via Vanilla Joy – “The biggest hit was a super fun and crazy balloon catching game. Here’s how to play: blow up lots of balloons (at least one for each child) and give every player a funnel. Toss and catch the balloons in the funnel until the kiddos are so dizzy and exhausted they can’t see straight! It’ll be a huge hit, I promise.”

4. Use your noodle balloon game via Parents.com– “Cut a few swimming noodles in two, so that you have one half for each player. Scatter 20 or so blown-up balloons on the ground around a laundry basket. Give players five minutes to move as many balloons as possible into the laundry basket without touching the balloons with any body part. The catch? The only tool they can use is their pool noodle. At first, players may try batting the balloons into the basket, but they’ll soon realize that they must pair up and use two pool noodles like giant chopsticks to lift the balloons into place.”

5. Balloon yo-yos via TinkerLab – This one’s a craft, a fun little party-time diversion, and a favor all in one! Check out how to make a balloon yo-yo here.

6. “Hidden notes” balloons via How Does She – Put messages inside of balloons and have the kids pop them. Some ideas:

– For little kids, write instructions on the notes and play a version of Simon Says (i.e., “hop up and down on one leg,” “rub your tummy and pat your head”)

– Use message balloons as clues on a treasure hunt, where each clue leads to the next balloon

– At older girls’ parties or sleepovers, write silly icebreaker questions (i.e., “Who do you think is the cutest boy in your class?,” “What’s the yuckiest food you’ve ever tried?”)

– If you have a lot of other games planned, write the names of those games on the slips of paper and use the balloons to choose which game everyone will play next

– Put a dollar bill inside some of the balloons for an extra special surprise!

Valentines aren't just for kids - I'd definitely u

There's no such thing as too many Valentine puns!