From Memorial Day to the 4th of July to Labor Day, there are lots of reasons to celebrate in red, white and blue in the summer – and a patriotic picnic would be so much fun for any of them! This picnic party was styled by Kylie of Made By A Princess, who entered (and won!) a party styling contest for Everyday Party Magazine. The challenge: to use my new Vintage Picnic Printables Kit, along with a budget of $150, to create a beautiful and creative event. Kylie’s great ideas took home the prize, and she says, “One of the best things about this party? It is completely doable and re-createable!” Read on for loads of inspiration… 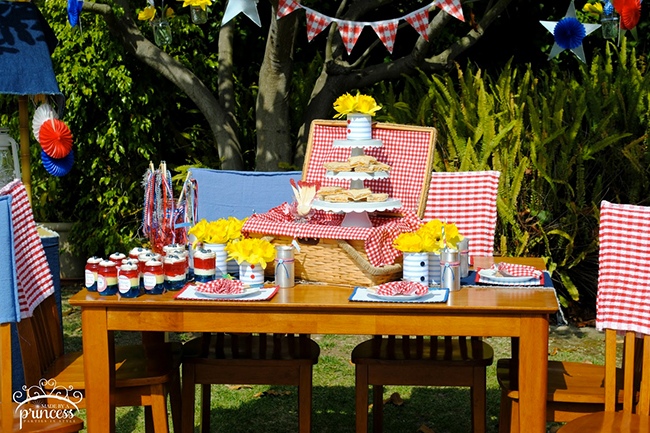 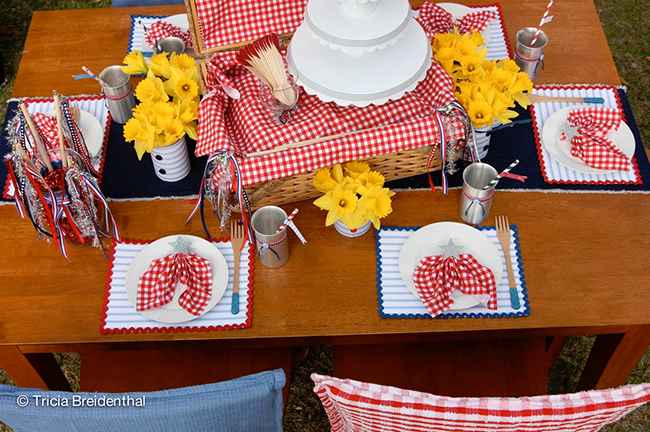 Denim fabric and red and white gingham from the clearance table at a local fabric store was used to line the picnic basket centerpiece and to make napkins. The napkin rings were made with blue ticking fabric tape and stars cut using a Silhouette Cameo. 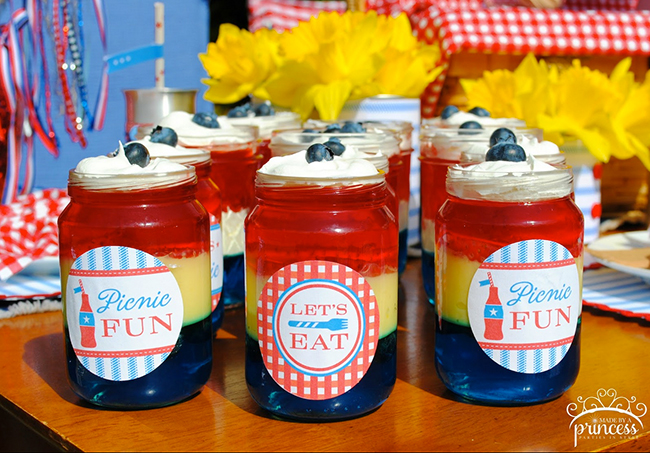 The red, white and blue layered Jello was made with two pudding flavors: vanilla for the kids and cheesecake for the adults. The circle designs used to make labels are included in the printables kit! 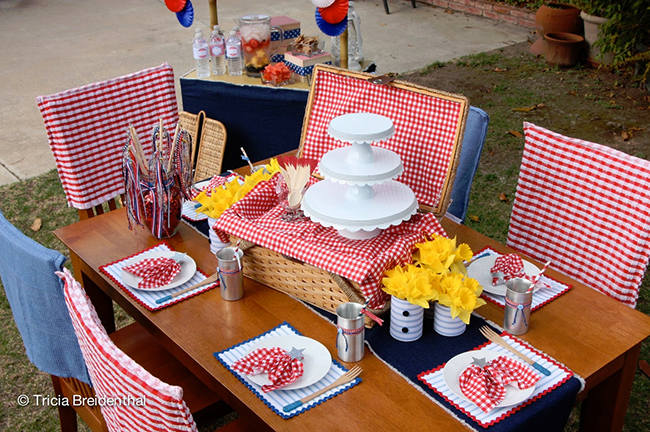 To make the placemats, Kylie printed the blue ticking paper on cardstock and trimmed it with red and navy ricrac as an accent. The chair backs are made from dish towels found at Dollar Tree (which is an awesome idea!). 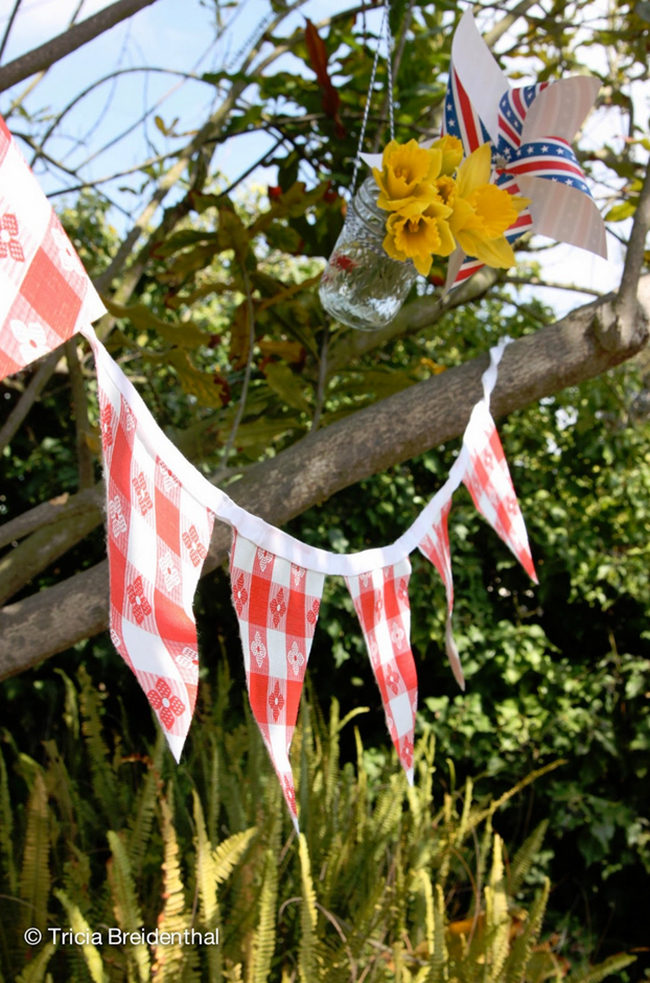 The no-sew bunting was made by cutting out triangles and hot gluing them to double sided bias tape. 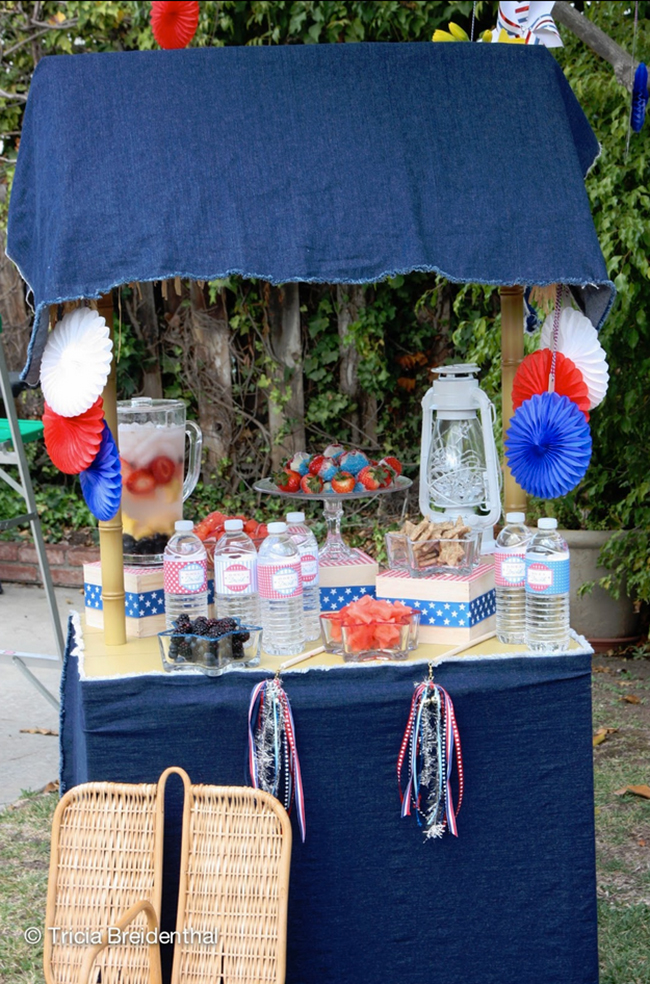 The table skirt and awning are made from denim that was washed and dried to give it a frayed edge look. 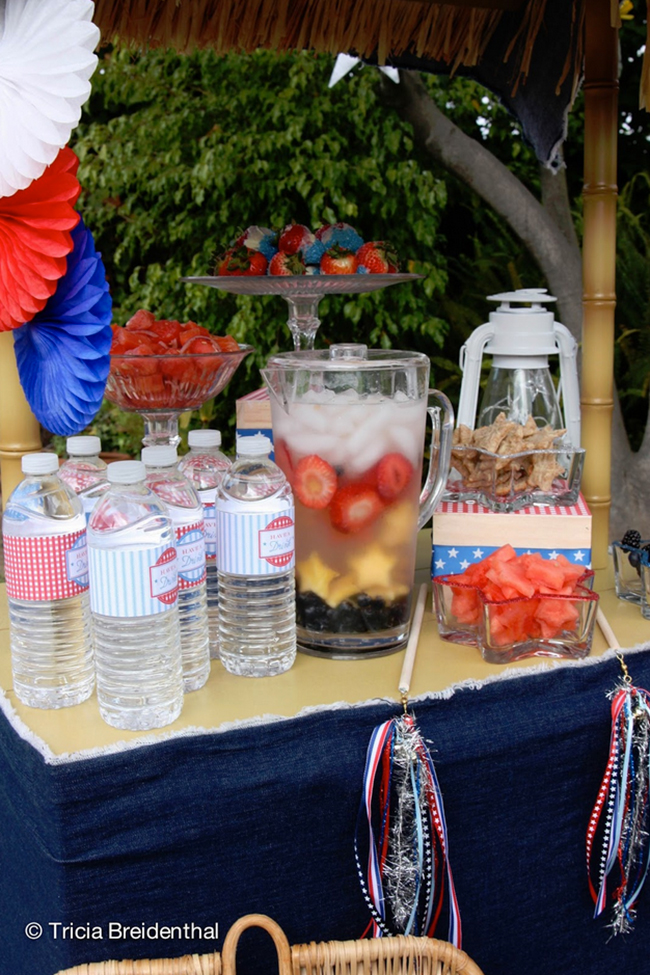 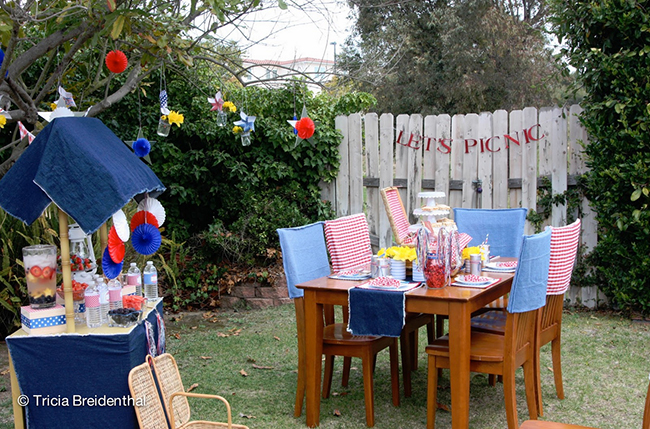 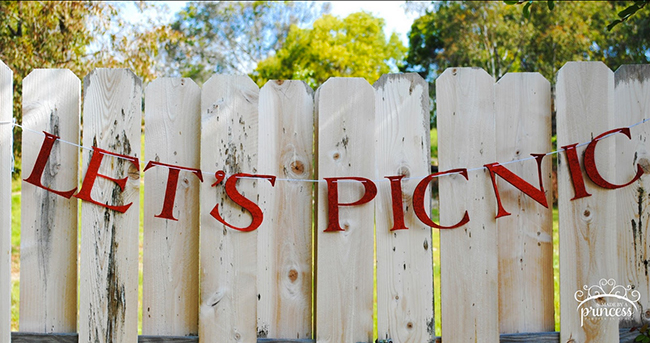 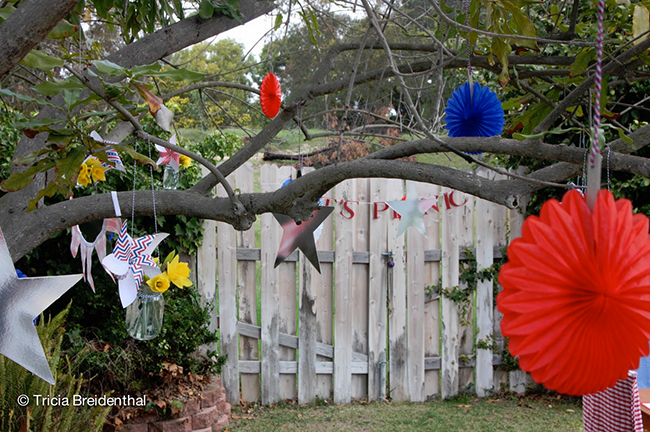 Kylie says, “I found silver stars and red, white, and blue tissue fans at Party City that I thought would be perfect in the tree. I borrowed mason jars from Pat of ZPerfect Party and wrapped the tops with blue and white twine and hung in the trees with daffodils and pinwheels I made. The pinwheels were really easy to make!  I attached them to some paper straws and used silver star brads to affix.” 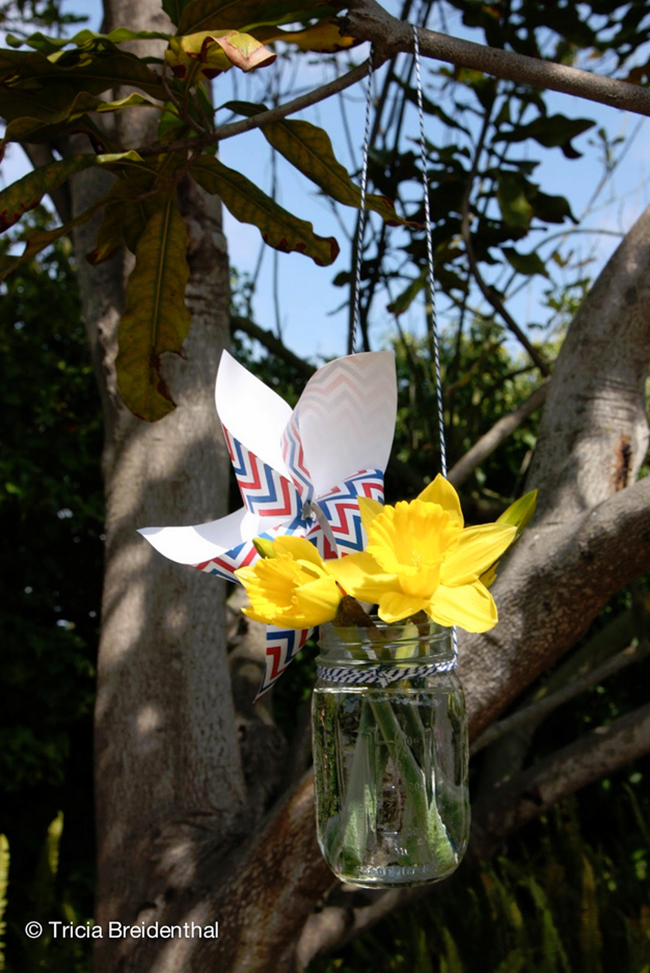 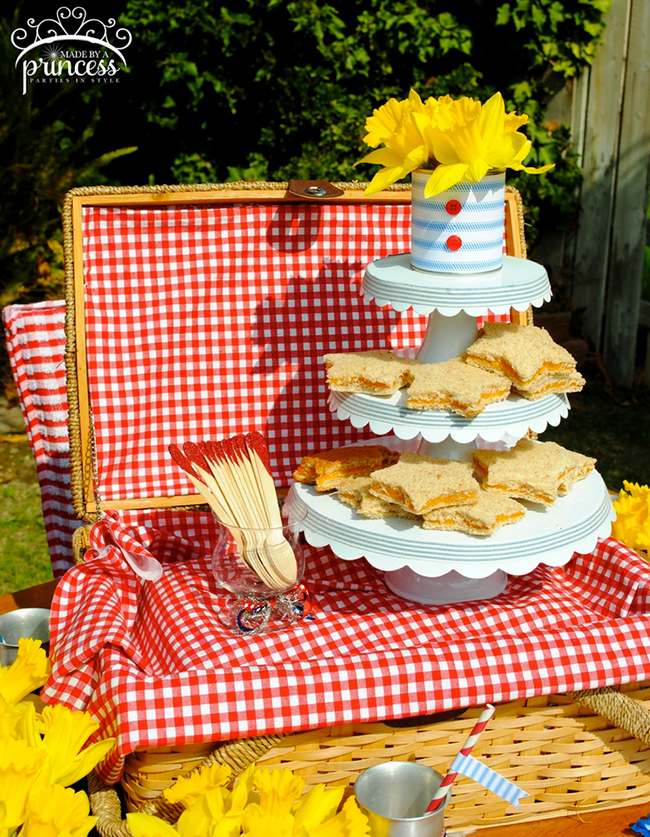 Kylie says, “I had some wooden forks and spoons in my party collection. I love sparkle and glitter so I just had to add a little bling to my table by glittering the forks and spoons. I started collecting cans awhile back so I printed blue ticking paper and wrapped it around the cans.” 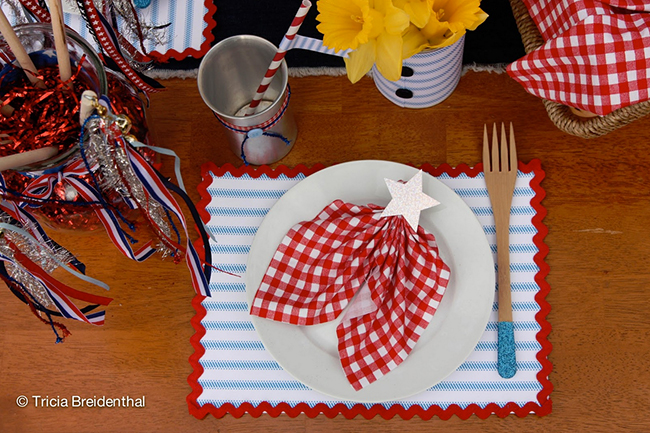 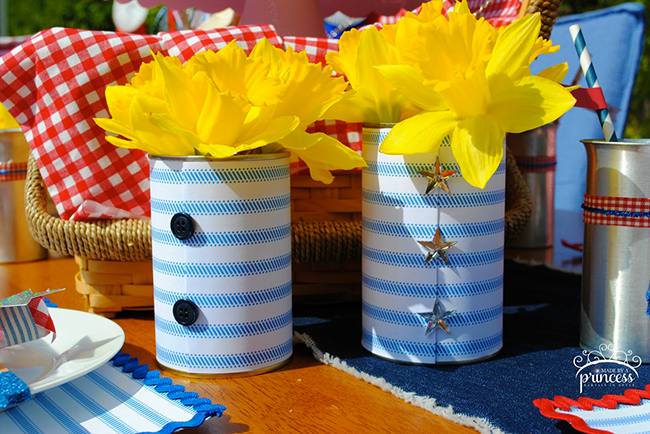 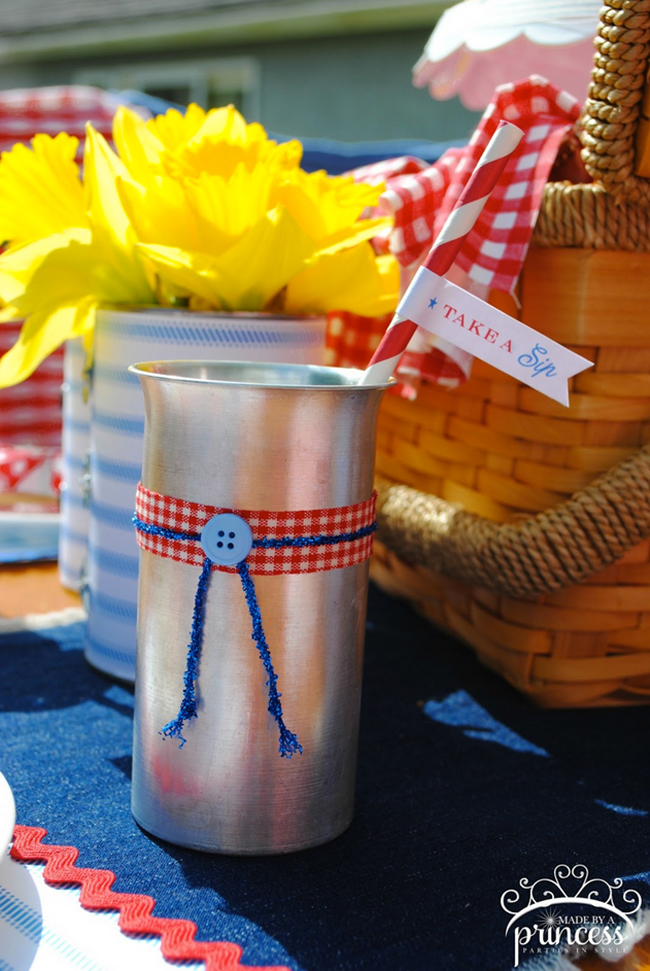 Aluminum drink cups were dressed up using fabric tape from PaperSource, ribbon, and a button. The paper straws are from Crafts by Jilly and the drink flags come with the Chickabug printables set. 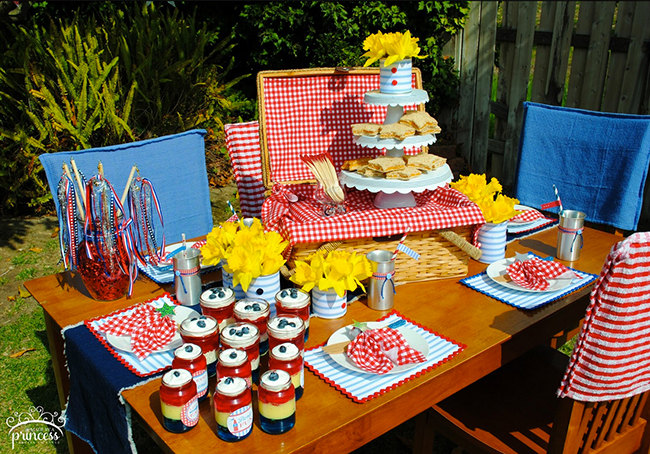 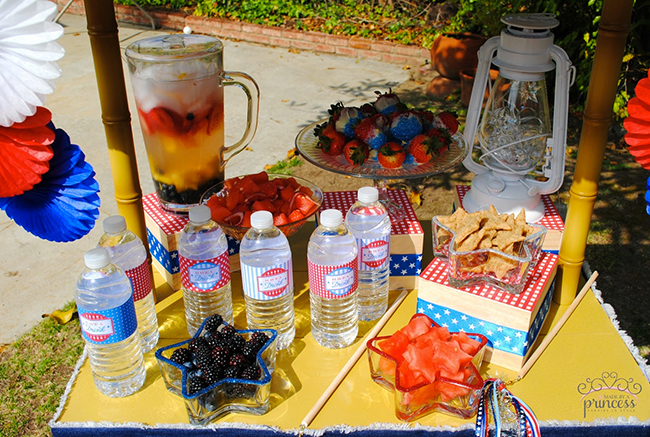 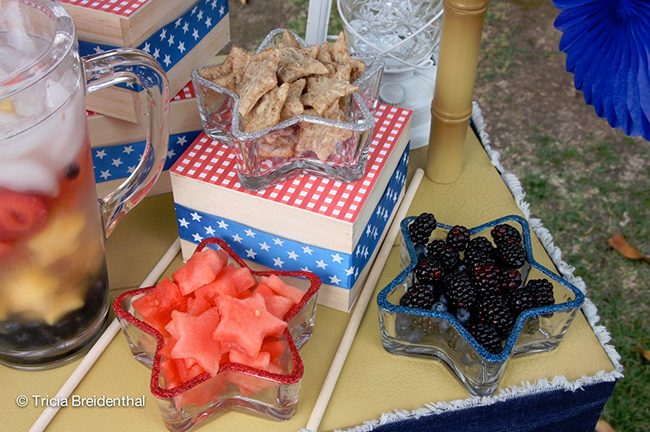 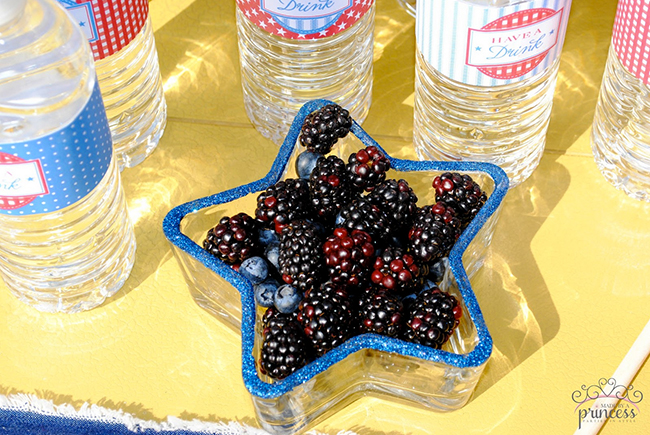 Star bowls are from the Dollar Tree (with a little glitter accent added on the rim). The drink labels are included in the printables set. 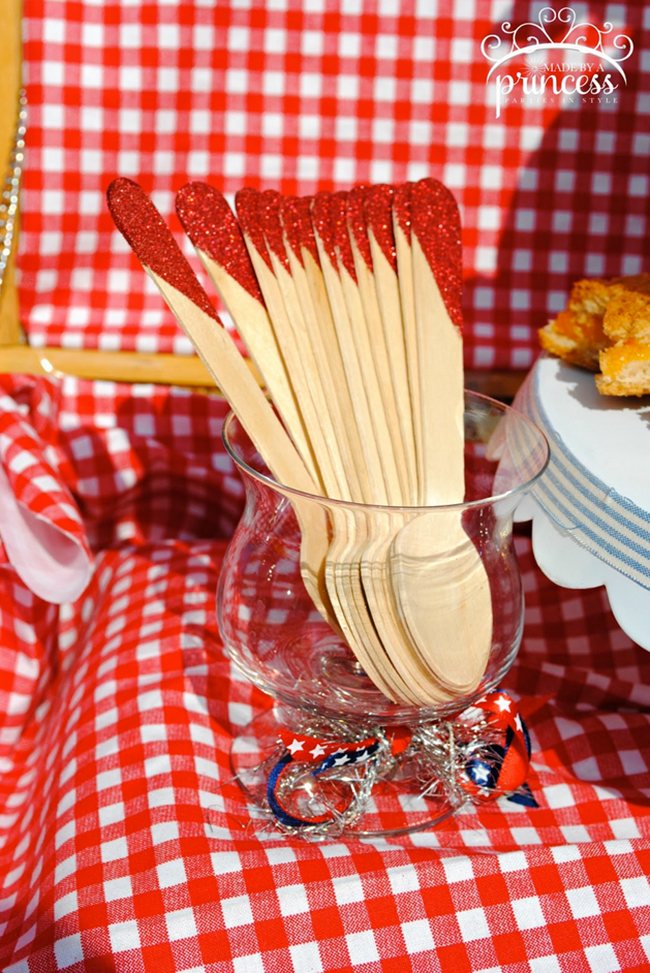 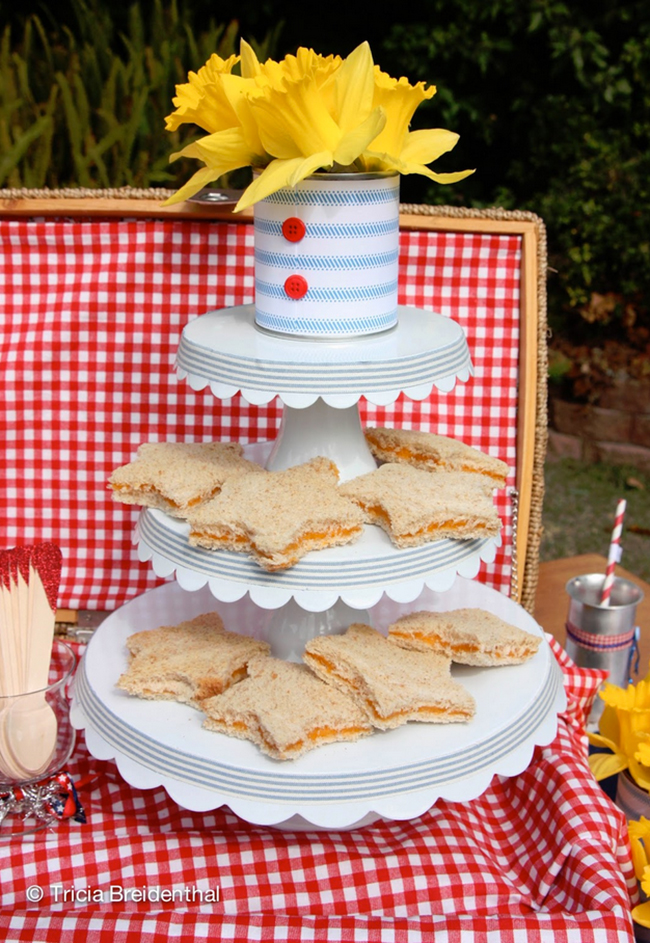 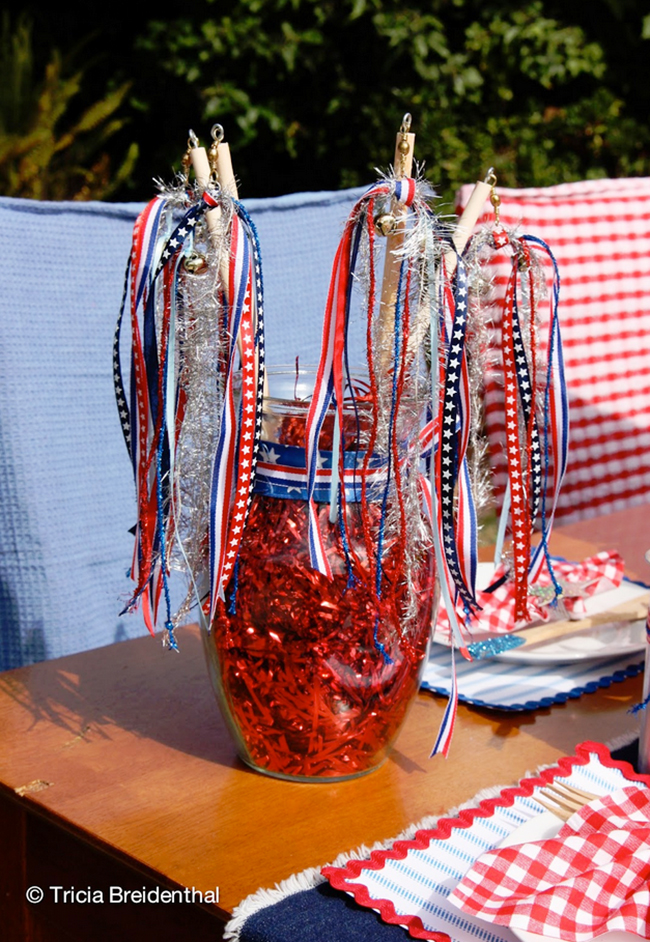 These “firework wands” are a great idea for a centerpiece, and for kids! Kylie says, “I called them firework wands because the silver ribbon I used make them sparkle. I bought dowels, fishing swivels, and split rings at Walmart and hooks at Home Depot.  These were fairly easy to make, just time consuming. The kids loved them!” 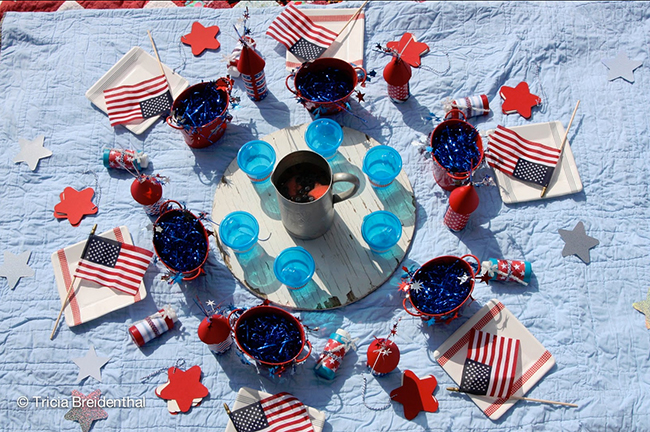 Most of the supplies from the kids’ blanket came from Dollar Tree, including the red buckets, blue sippy cups, blue shred, bubbles, crayons, and square white plates. 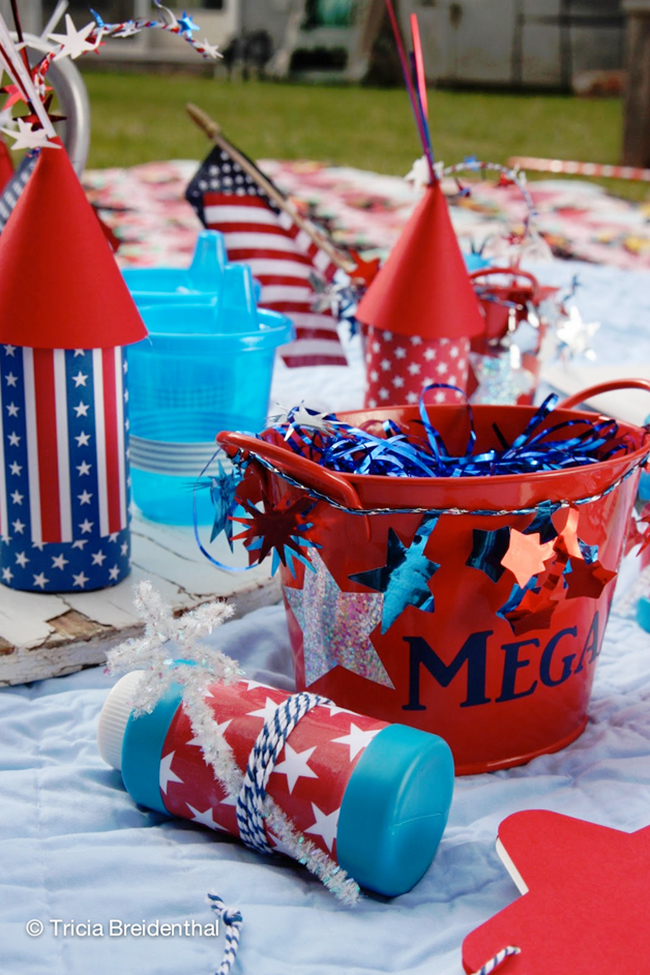 The stars and names on the buckets were made with vinyl from Joanns and a Silhouette Cameo. 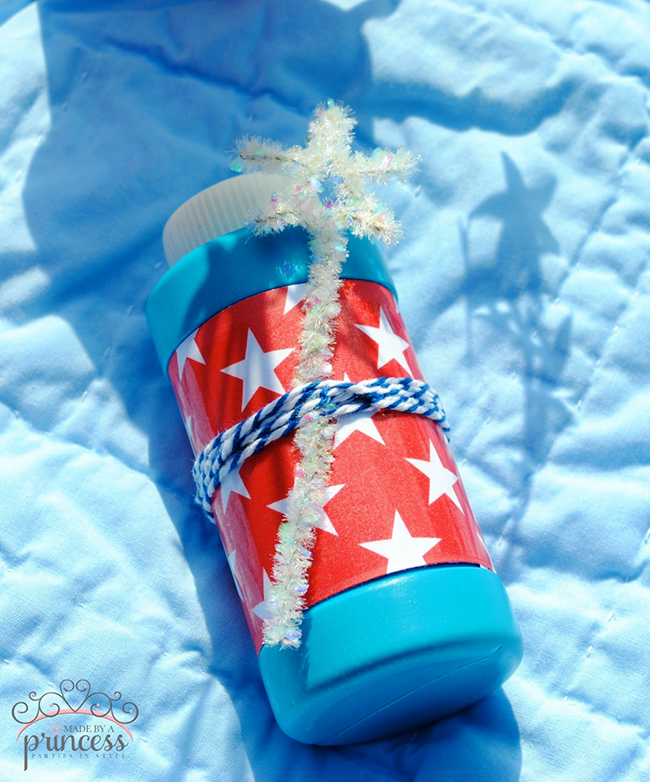 Bubbles from the Dollar Tree were dressed up with a homemade pipe cleaner wand, twine from Crafts By Jilly, and bubble labels that were made using printable red and white star paper. 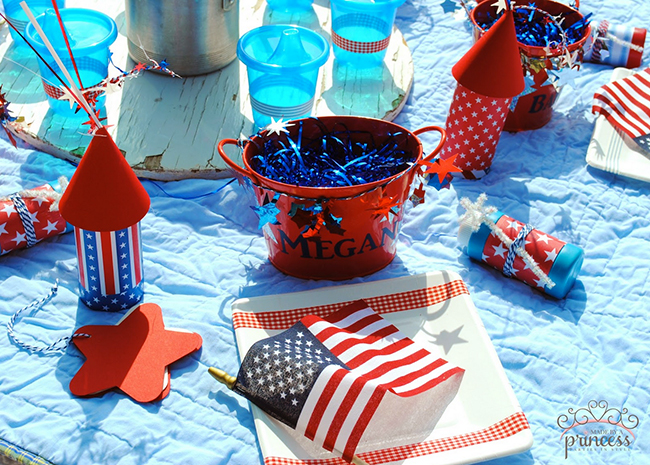 Beautiful work, Kylie!! Thank you so much for sharing!