Today’s party feature is a soccer theme party for a 5-year-old boy, Tyler! Tyler’s mom, Jessica, sent me such a lovely recap of the party that I’m going to let HER tell the story in her own words. Take it away, Jessica! : )

“My son Tyler LOVES soccer and of course requested a soccer party! We held it at an indoor soccer complex in NJ. Luckily we decided to do it indoors because it rained all afternoon.

“I decided to have a red and black theme because my son loves the color red and they are the Rutgers University colors (which is the school he loves because his uncle goes there). So I began the mission of doing lots of research on the web and found most of my inspiration from the Crackers Art blog where she featured a party she held for her son.” 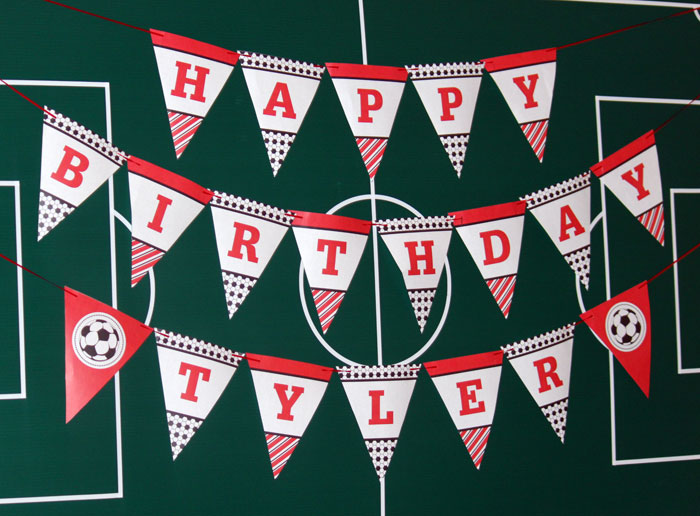 “This was supposed to be the backdrop for the dessert table  but because the layout of the facility was challenging, we posted this up on the wall behind where the children were sitting. The fabulous DIY banner is from Heather at Chickabug. We had a piece of plastic sign material covered in green vinyl and outlined in white to look like a soccer field.” 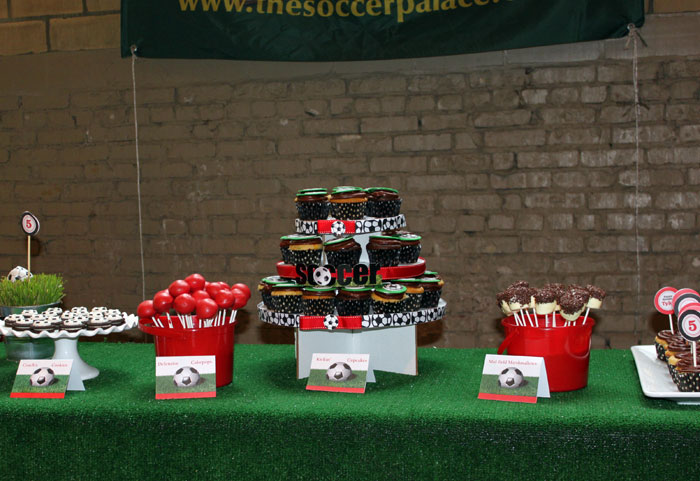 “We bought some Astroturf from Home Depot and used it as a tablecloth for the dessert table.” 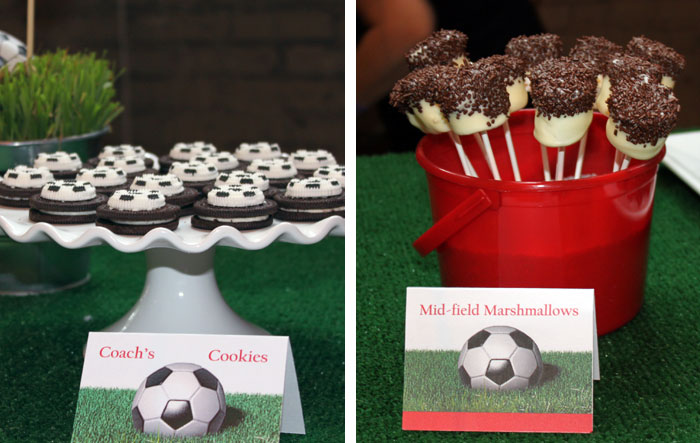 “These are plain old Oreo cookies with a Wilton candy soccer ball on top. I saw these on Couture Parties’ Twitter and thought, how easy and cute! They took all of 5 minutes to make and everyone loves Oreos! I made the buffet cards and found inspiration for what to call the treats from the Crackers Art blog.” 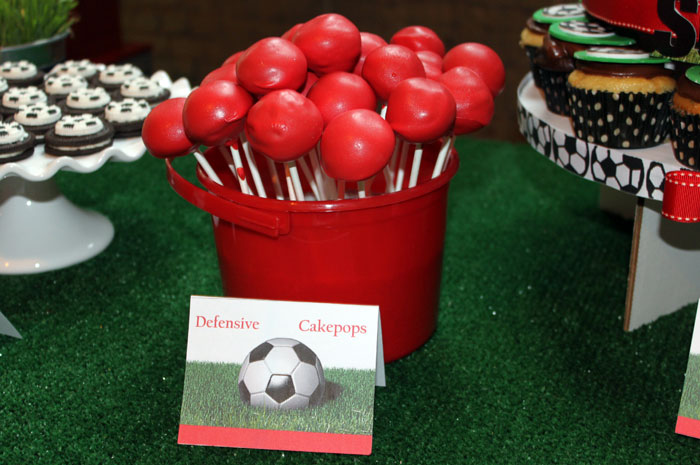 “We had a bunch of other treats too for the kids to enjoy: marshmallow pops and cake pops. All made by me very late the evening before the party.” 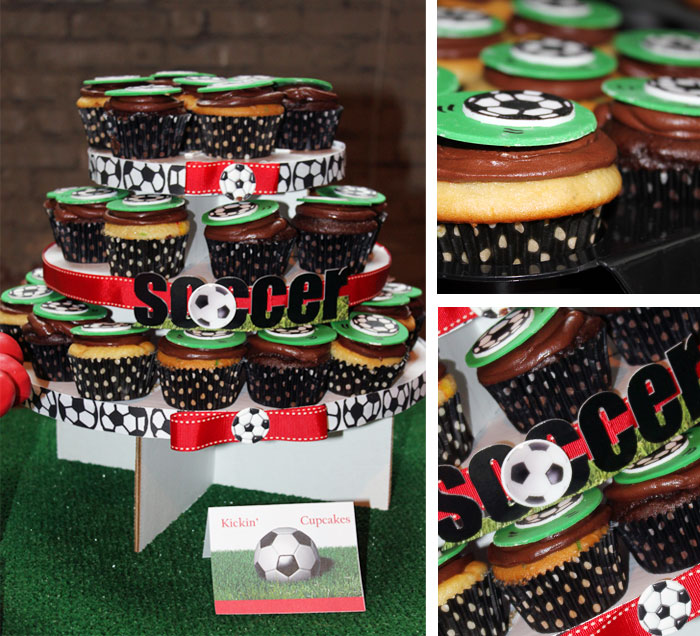 “The centerpiece of the dessert table was really the cupcakes and the cupcake stand. I purchased the stand from Cupcaketree and then decorated with ribbon and stickers from Michael’s. The trick is to cover the tiers with white wrapping paper so you can reuse the stand for each party you have! The printable cupcake toppers were designed by Chickabug and the edible cupcake toppers were designed by Two Sugar Babies.” 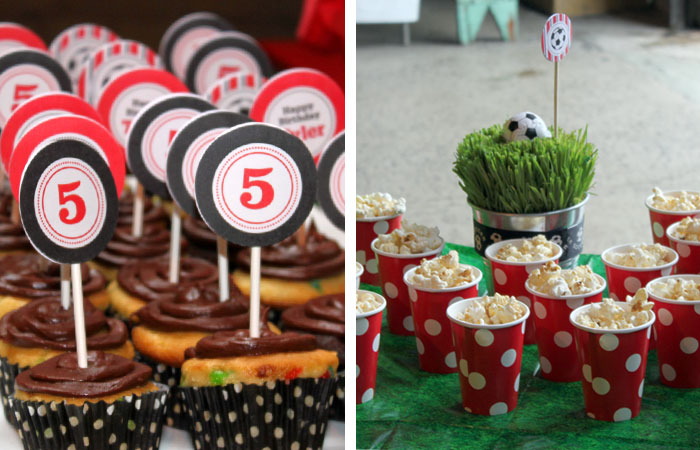 “We had popcorn in polka dot cups (from Party City) for everyone to enjoy.” 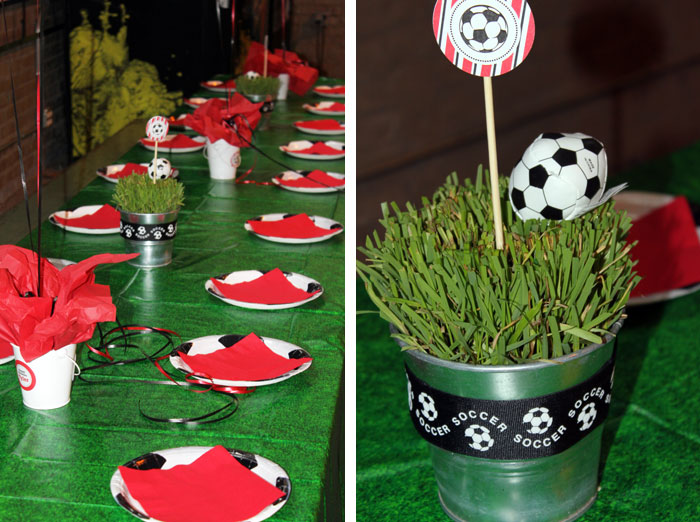 “The tablecloths for the kids’ tables came from Party City and we had 2 types of centerpieces: one was wheatgrass in containers from IKEA with a topper from Chickabug and a mini soccer ball. The others were small white metal buckets with red and black balloons.” 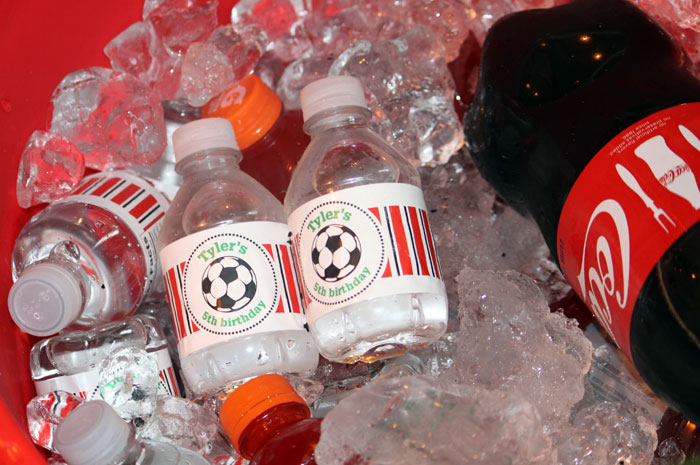 “Heather from Chickabug made me these fabulous soccer water bottle labels. Everyone thought they were adorable!” 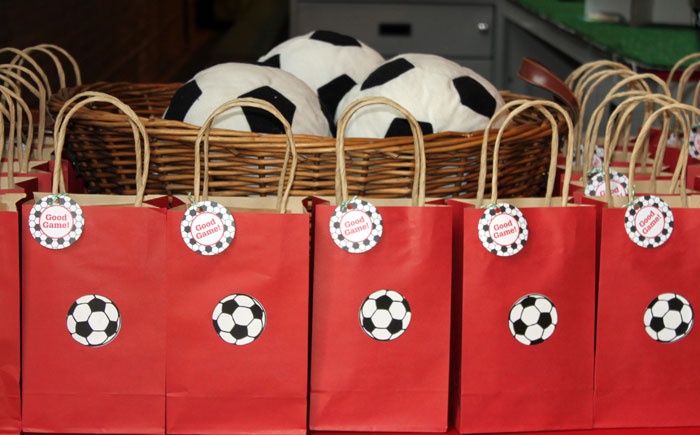 “The favors were plush IKEA soccer balls for the little kids and a red paper bag with a water bottle, stickers, mini soccer balls and tattoos for the bigger kids. Each bag had a tag on it that said ‘Good Game!’ designed by Chickabug.” 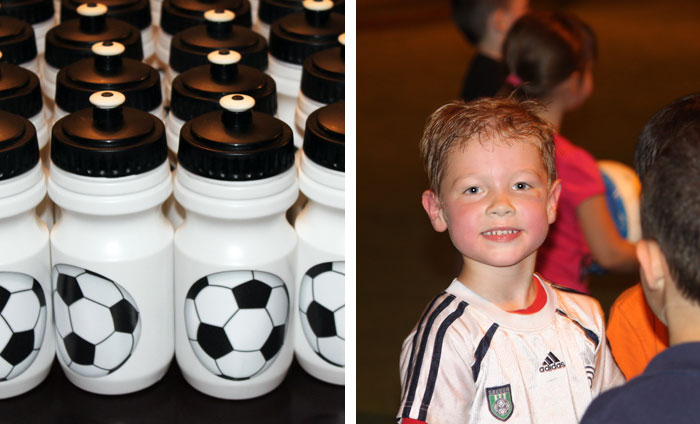 “Everyone had a great time and it was a party that my son will never forget!” 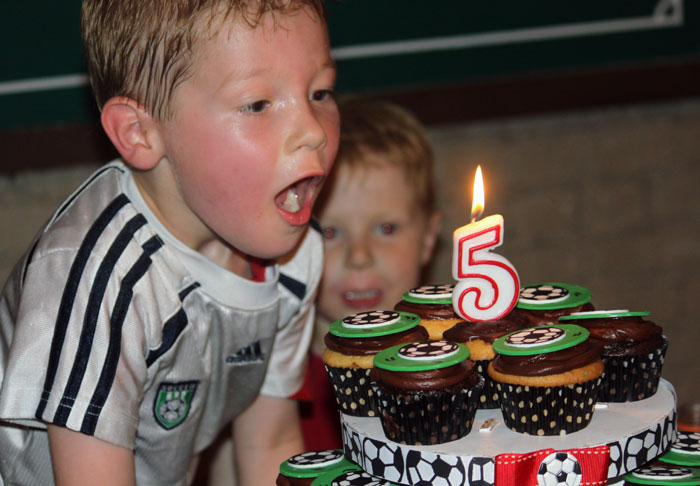 Thank you SO much, Jessica!! Happy birthday to Tyler! : )

Shop for personalized soccer theme party paper goods and printables here.
Or, check out more soccer party ideas on Pinterest or here on my blog!