Yesterday was one of those “never saw it coming” days – one of my blog posts was featured by none other than the official Etsy facebook team! My lil’ blog link was sent to a third of a million facebook users. (Cue shrieking and bouncing around the house!)

I can’t even get my head around how many people that is, but the numbers I do have a grasp on don’t lie – I have quite a few new blog readers and facebook friends of my own today. So, welcome, super-cool Etsy peeps! I’m glad you decided to stick around! : )

Now, since you guys liked the cupcake fondue idea (you’re my dessert soulmates!), here’s another cool idea I’ve had up my sleeve for a little while – popsicle brownies. Holy cuteness, right?? 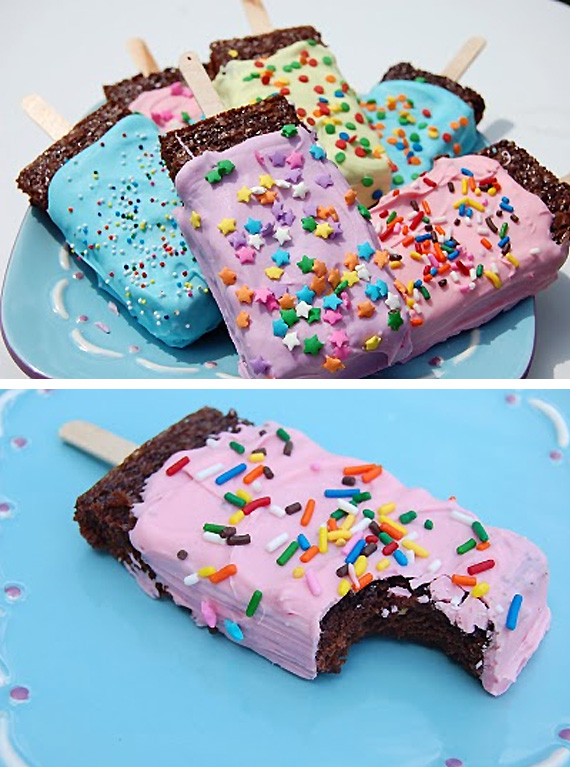 Here’s what you need to make them:

Prepare the brownies according to your favorite recipe and let cool. Cut them into bars and put them on a sheet of wax paper.

Melt the candy melts in a bowl in the microwave at 50% power, stirring every 30 seconds until smooth.

Use the melted candy to frost the top and sides of the brownies (or, submerge the brownies entirely for an even better effect!). Add sprinkles and allow the candy to harden. Insert a popsicle stick before serving.

The photos and tutorial were originally from Crazy Domestic, now on Somewhat Simple.