A little Etsy shopping for my favorite mutt

I had a lightbulb moment a few weeks ago while I was putting on Charlotte’s collar. It was a really cute one from Old Navy – the kind that snaps shut with a plastic buckle. Charlotte has had a lot of Old Navy collars in the last two years, because they’re adorable, they’re cheap as heck, and they’re usually kept right next to the checkout in the optimum impulse-purchase area.

But I realized – two years later – that she hates the snap. She hates it! It’s just like when I first adopted her and I had this silly human notion that all dogs love the dog park. So I’d take her, and she’d have an awful time, and I kept thinking that the next time would be better. Because she’s a dog! Dogs love dog parks!

But not my dog. She’s a loner and she likes it that way, and it took quite a few unpleasant outings for me to wake up and realize that maaaaybe the dog park needs to go.

Well, same with the collars! Every time that plastic clasp would snap shut, it was like a little jolt of electricity would go through Charlotte’s body, and her anxiety level would spike way up. And it took two years for me to really realize it!

I may not have introduced you properly to my lil’ mutt, here, but this is all you really need to know: when it comes to Charlotte, we don’t need any extra anxiety. She’s a rescue dog, a herding dog, and an incredibly high-strung, intelligent, and sensitive dog all rolled up into one VERY TIGHTLY WOUND PACKAGE. (Although she’s also a champion laze-about and cuddler – go figure.) So reducing her anxiety level is in everyone’s best interest – believe me.

The solution, in this case, is for the silly human to stop buying snap collars and to find a cute buckle collar instead. But that’s easier said than done! They’re really not out there – just try finding a good one (no leather allowed)!

So – Etsy to the rescue!! I found the CUTEST collars ever in a shop called r.e. stowe, and I fell in love with MANY of the options before settling on a thin pink ribbon and requesting a custom order. The shop owner, also named Heather (woo!), did a FABULOUS job on the collar – it’s the very best kind of handmade, where you can tell it’s going to last longer and wear better than what you would’ve bought in a store. And just look at how beautiful it is! (A million times better than Old Navy!) 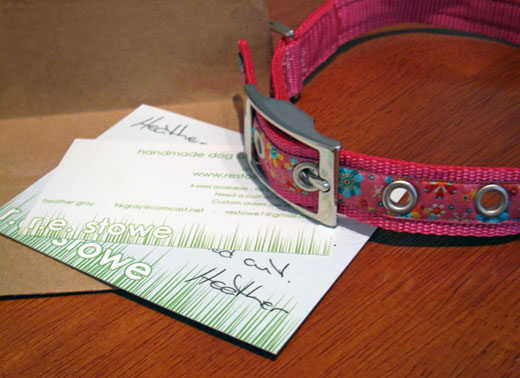 And the closure? Whisper-quiet. : )

Confession time, though – I kind of also bought Charlotte a new tag, too. I had a GREAT excuse to go collar shopping, but there was no good reason for buying her a new tag. But this tag is so special that I just had to get it for her!

The tag is from The Copper Poppy, and it’s called the Cherry ID tag. In the shop it’s offered in bronze, but I requested it in aluminum, and it arrived in no time flat! The packaging it came in was so sweet, I almost hated to take it apart – but of course, the tag inside was the very best part! 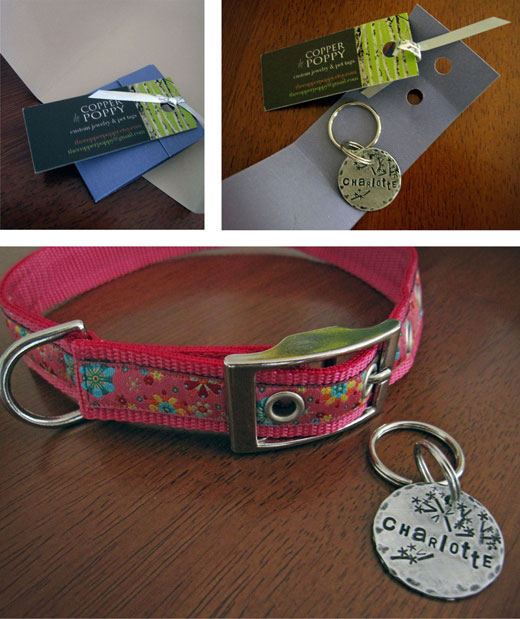 The tag is a tiny work of art, and it’s absolutely perfect – just the right size and just the right weight. And I think it looks great with the new collar! Charlotte sure is one spoiled mutt… but she deserves it. : ) 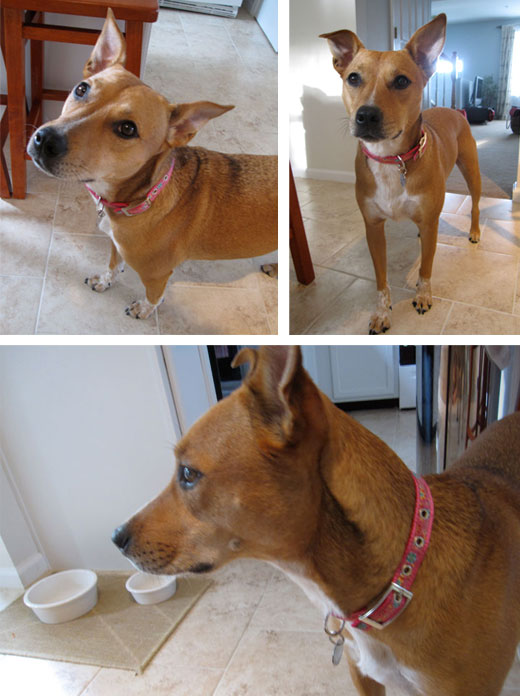