Candy corn has always been my favorite Halloween candy, but until I came across this recipe for candy corn cream cups, I never knew you could actually melt candy corn to make other things. This is a revolutionary idea, here, peeps!

Amanda from Joy in the Jumble is the one who came up with the candy corn recipe idea, and she was kind enough to share her magic on my blog today. She says, “These little dessert cups are the perfect size for the quick, sweet fix. The orange layer is super sweet, but it’s tempered nicely by the vanilla pudding and whipped topping in each bite.” 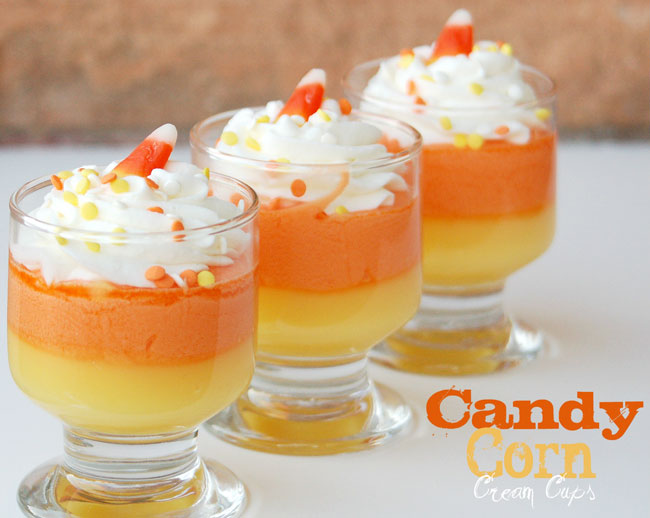 See that orange layer in the middle? That’s where the candy corn is! It’s sandwiched between yellow pudding and whipped cream. YUMMMM. 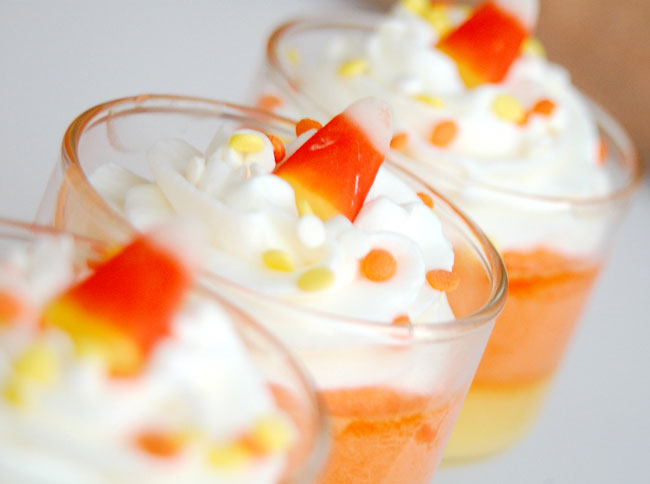 Yellow Layer
Mix milk and pudding together in a bowl according to package directions, and let it start to firm up slightly. Place 2 tablespoons of the pudding in the bottom of the dessert cup.

Orange Layer
Make the first part of the orange layer the night before or at least 4 hours before serving.

On medium heat, pour the whipping cream in a saucepan and stir constantly to prevent scorching. Once the whipping cream is heated, pour in the candy corn, again stirring constantly until the candy has disintegrated and turned the cream a pumpkin orange. Remove from burner, bring to room temperature, then place in the refirgerator for 4 hours or overnight.

Once the orange layer is fully chilled, place it in a mixing bowl and whip until soft peaks form. Place 2-3 tablespoons on top of the yellow layer.

White Layer
Pour whipping cream into a new mixing bowl and whip until soft peaks form. Add the powdered sugar and whip on high speed until desired consistency is achieved. Be careful not to overwhip, as it will begin to break down. Scoop a dollop or use an open star frosting tip in a pastry bag. Sprinkle with desired toppings.

Someone on Amanda’s blog suggested making the cups using chocolate pudding and chocolate candy corn. Interesting! I also think it would be a nice option to make the bottom layer pound cake instead of pudding (but then, I’m always partial to cake). : )

You can check out the original post about the candy corn cream cups on Joy in the Jumble. Thanks so much for sharing, Amanda!!

Shop for Halloween theme paper goods and printables here.
Or, check out more Halloween ideas on Pinterest or here on my blog!